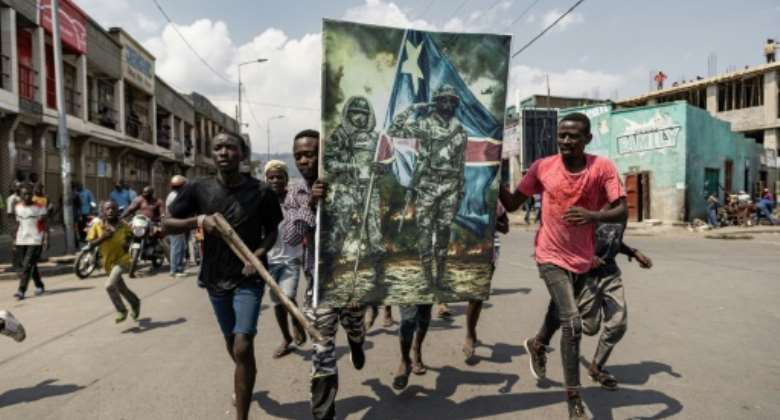 Anger at Rwanda's alleged support for the M23 fuelled protests at the border city of Goma in June. By Michel Lunanga (AFP)

Rwandan troops have attacked soldiers inside DR Congo and aided the M23 rebel group, according to a report by independent experts for the UN seen by AFP on Thursday.

The findings follow months of deepening tensions between the Democratic Republic of Congo (DRC) and Rwanda over the notorious M23.

The DRC has repeatedly accused Rwanda of backing the militia, which has captured swathes of territory in recent months. Kigali has repeatedly denied any involvement.

But according to a 131-page report by experts for the UN Security Council, Rwanda has launched military interventions inside Congolese territory since at least November 2021.

Rwanda also "provided troop reinforcements" for specific M23 operations, the report said, "in particular when these aimed at seizing strategic towns and areas."

The investigation also found that Congolese forces had been providing support for armed groups in the deeply troubled east.

It first leapt to prominence in 2012 when it briefly captured the eastern DRC city of Goma before a joint Congolese-UN offensive drove it out.

It has made significant advances, notably capturing the strategic town of Bunagana on the Ugandan border in June.

On May 25, the report said, a large DRC army base in Rumangabo in eastern North Kivu province came under heavy mortar and small-arms fire.

An estimated 1,000 Rwandan troops also cut the main highway leading to the provincial capital Goma, an important commercial hub on the Rwandan border, and attacked Congolese positions, it said.

On the eve of the attack on Bunagana, and on the day itself, Rwandan soldiers were in the vicinity, the report said, citing drone images from the UN peacekeeping mission in the DRC, eyewitnesses, amateur videos and photos.

It added that Ugandan troops at the border acquiesced to M23 fighters crossing into the DRC.

"On repeated occasions, aerial imagery showed large columns of up to 500 armed men in the vicinity of the DRC, Rwandan and Ugandan borders, moving in a very organized manner," the report said.

Thousands of people have fled their homes since the M23 resumed attacks last year. By BADRU KATUMBA (AFP)

Some 300 Rwandan troops also conducted operations against rebel groups in eastern DRC, such as the Democratic Forces for the Liberation of Rwanda (FDLR).

The FDLR is a Rwandan Hutu rebel group based in the DRC, which the Rwandan government views as a threat. Kigali has regularly accused Congo of supporting the militia.

The UN report also found that the Congolese army supported militias active in the east of the country.

On May 26, after being dislodged from positions near the Goma highway, the Congolese army launched a counterattack alongside militia fighters, for example.

A coalition of armed groups had formed in May, with the knowledge of Congolese officers, the report said.

Leaders of several militias confirmed to the experts that the Congolese army had provided them with weapons and munitions "on several occasions," it added.

The DRC and Rwanda have had strained relations since the mass influx of Rwandan Hutus accused of slaughtering Tutsis during the 1994 Rwanda genocide.

The report comes after 36 people died in eastern Congo last week during protests against the UN's peacekeeping force, which were fuelled by perceptions that it is ineffectual against armed groups.