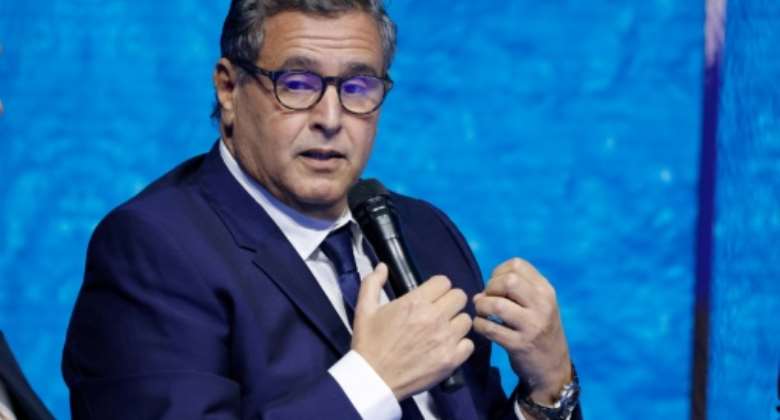 The government of the North African kingdom, which is heavily reliant on oil imports, insists it is doing its best to ease the economic impact of Russia's invasion of Ukraine and the ensuing shock to crude prices.

But that hasn't stopped some 600,000 Facebook accounts sharing Arabic or French hashtags demanding that "Akhannouch quit".

United Nations Secretary General Antonio Guterres has just slammed global energy giants reaping billions in windfall profits for their "grotesque greed" that was harming the world's poorest and urged governments to tax them.

It is a sentiment shared widely in Morocco.

Many are calling on the government to halve fuel prices and impose a cap on the profits of petrol retailers -- including the dominant player Afriquia, of which Akhannouch is the majority owner.

"This campaign's focus on the prime minister in person reflects anger at the mix of money and politics which Akhannouch is seen as embodying," said analyst Mohamed Chakir.

Critics see the premier as "part of the problem rather than as someone presenting solutions", Chakir added.

Petrol prices in Morocco hit record highs of 18 dirhams ($1.80) for a litre of unleaded in June, fuelling overall inflation expected to top five percent this year, and adding to the misery of farmers hit by the worst drought in decades.

Petrol prices in Morocco hit record highs of 18 dirhams ($1.80) for a litre of unleaded in June, fuelling overall inflation. By FADEL SENNA (AFP)

While discontent has not spilt onto the streets, the online campaign against Akhannouch has been taken up by opposition parties and trade unions.

"Petrol companies are continuing to fleece Moroccans," leading union the Democratic Confederation of Labour said in a statement, accusing the government of "silence".

It also charged that fuel distributors are "exploiting the crisis to rack up immoral profits".

Neither Akhannouch nor Afriquia or its rival fuel retailers have publicly responded to the campaign or the accusations -- and Afriquia is not obliged to disclose its profits.

The government has sought to blame rising living costs on the war in Ukraine which has driven up fuel and food prices, accelerating inflation in many countries.

The Moroccan government has sought to blame rising living costs on the war in Ukraine. By BULENT KILIC (AFP)

Akhannouch was named to head the government in September after his National Rally of Independents (RNI) thrashed the long-ruling Islamists in a parliamentary election.

He promised to improve living conditions and tackle social inequalities exacerbated by the coronavirus pandemic.

The 61-year-old is seen as close to King Mohammed VI and has a personal fortune worth some $2 billion according to Forbes.

Morocco's King Mohammed VI called for "mechanisms of national solidarity and a determined and responsible campaign against speculation and price manipulation". By Handout (Moroccan Royal Palace/AFP/File)

Morocco used to subsidise fuel, but this system was scrapped in late 2015 because it was seen as costing the state too much.

While the market was liberalised, this was meant to be accompanied by cash payouts to the most needy households -- benefits that never materialised.

Many on social media are now calling for taxes on consumers at the pump to be slashed.

The government has not responded, although it said in March it would pay out some $206 million to help out transport workers operating some 180,000 vehicles, who had staged a national strike over spiralling fuel costs.

It has also doubled subsidies on cooking gas, flour and sugar.

The country's economic woes have not gone unnoticed by King Mohammed.

In an annual speech to the nation on Saturday, the monarch called for "mechanisms of national solidarity and a determined and responsible campaign against speculation and price manipulation".

Nor is this the first time Afriquia has faced pressure.

A picture from 1946 shows Moroccan workers install an oil well during prospecting in the Rharb region in the country's north-west. By - (AFP/File)

The firm was among several major companies hit by a boycott in 2018 over a cost-of-living crisis when Akhannouch was agriculture minister.

But following the latest criticisms, state news agency MAP has slammed a "tendentious" campaign, saying it was "fuelled by more than 500 fake accounts".

That article sparked another storm on social media, with opposition MPs accusing MAP of pro-Akhannouch bias.