By Clement MELKI with Alice RITCHIE in Rome
Africa 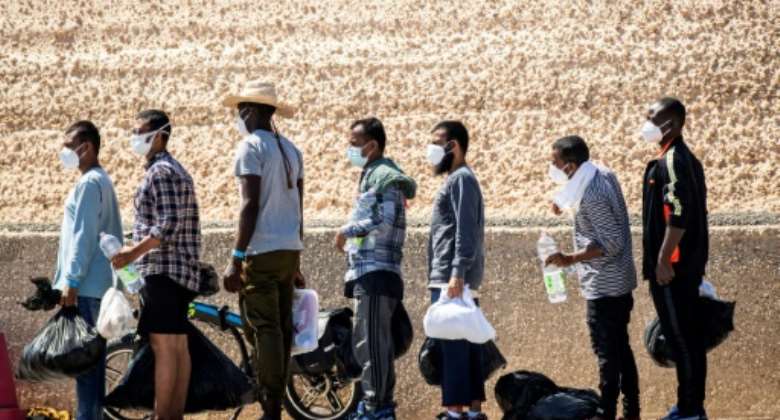 The tiny island of Lampedusa is on the front line of migration into Europe. By Alessandro SERRANO (AFP)

Italian anti-immigrant leader Matteo Salvini on Thursday takes his campaign for September elections to the tiny island of Lampedusa, the landing point for thousands of migrants trying to reach Europe.

Dozens of leaky, overcrowded boats have arrived in and around Lampedusa in recent days from north Africa, some landing directly and others requiring rescue by the local coastguard.

As often in the summer months, when the sea is calmer, the island's reception centre has become overwhelmed, with more than 1,500 people said to be there this week, in a facility designed for 350.

Salvini, who leads Italy's League party, has made stopping the arrivals the cornerstone of his platform ahead of general elections on September 25, where he is expected to gain power as part of a right-wing alliance.

"Italy cannot accept tens of thousands of immigrants who only bring problems," he said on Wednesday, adding: "Italy is not Europe's refugee camp."

He accused Prime Minister Mario Draghi's government -- which he helped bring down last month by withdrawing his support -- of trying to cover up the problem on Lampedusa before he arrives.

"The island is collapsing -- in the next few hours, before my visit tomorrow and Friday, will they try to hide their failures again?" Salvini asked.

When he was interior minister in 2019, Salvini blocked several charity rescue ships carrying migrants from disembarking in Italy, under his party's "closed ports" policy.

Italy's Matteo Salvini has put stopping migrant boats at the heart of his campaign for September 25 elections. By Andreas SOLARO (AFP)

The move saw him prosecuted in Sicily on charges of kidnapping and abuse of office, in an ongoing trial he has worn as a badge of honour.

But surveys suggest immigration is less of a concern for Italians than the rampant inflation squeezing already stagnant wages.

And Salvini's League has in recent months been overtaken in the polls by Giorgia Meloni's Brothers of Italy, who have also called for migrants to be stopped at the Libyan coast.

Her post-fascist party is topping opinion polls ahead of the election, and looks set to enter government in an alliance with Salvini and Silvio Berlusconi's Forza Italia.

Tiny Lampedusa is known for its gorgeous beaches, but its location closer to Tunisia than Sicily has put it on the front line of migration into Europe.

The central Mediterranean is the world's deadliest migration route, with almost 20,000 deaths and disappearances since 2014, according to the International Organization for Migration (IOM).

Many of those who survive end up on Italy's shores. The interior ministry has counted more than 42,000 migrant landings so far this year, up from almost 30,000 in the same period in 2021.

The numbers show no sign of slowing -- rescue charities SOS Mediterranee, Doctors Without Borders (MSF) and Sea-Watch have picked up more than 1,000 people in the central Mediterranean in the past few days.

MSF's ship Geo Barents is currently carrying 659 people including more than 150 minors, but despite requests to Italy and Malta they have not yet been given a port to disembark them.

"For some of them, it is now the 7th day on board of the #GeoBarents. The situation is growing more precarious every day and the food rations are running low," MSF tweeted Wednesday.

"Yesterday, two persons tried to throw themselves overboard in an act of desperation, including one person who made the attempt twice."

Rescue charities SOS Mediterranee, Doctors Without Borders (MSF) and Sea-Watch have picked up more than 1,000 people in the central Mediterranean in the past few days. By Handout (MÃ©decins sans FrontiÃ¨res (MSF)/AFP)

Like Salvini, the charities have been the target of prosecution in Italy -- but for alleged collusion with people traffickers, which they deny.

In a joint statement on Wednesday, SOS Mediterranee, MSF and Sea-Watch said they cannot cope with the numbers, urging the EU to step up -- and warning that more people would die.

Latest Photo Reports
Catch up with all the political quotes from our politicians.
Advertise here
More from Africa
ModernGhana Links
Blinken says backing for armed groups in DRC must 'cease'
‘Africa will decide its energy future’, Obasanjo, 'We will decide what is best for us'
CAF launches new Super League to boost clubs
TOP STORIES