Togo battles to save forests as poverty threatens reserves 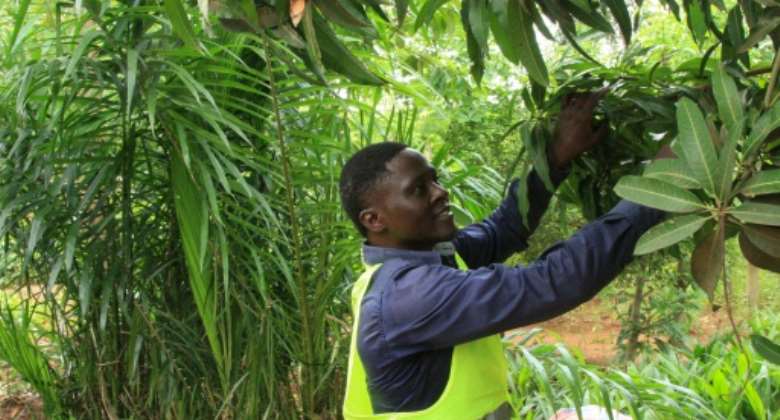 Day and night, Komlatse Koto watches over the forest near his village in southern Togo, hoping to prevent the diminishing patch of woodland from being turned bit by bit into a treeless clearing.

For years, inhabitants of Ando-Kpomey village, around 65 kilometres (40 miles) north of Togo's capital Lome, have anarchically cut down trees for firewood and charcoal.

Koto and his fellow watchdogs are doing all they can to end the destruction, warning villagers that by harming the environment they also harm their own livelihoods.

"The development committee keeps a close watch," said Koto, who for two years has guarded the forest surrounding his village of around 500 people.

That very high rate has accelerated in recent years, mostly because firewood is the main energy source for cooking in 90 percent of households.

Gas is beyond their reach while other forms of energy are not widespread.

Access to cooking gas for many Togolese has worsened since the Russian offensive in Ukraine, which made fuel and gas prices soar.

"The situation is very critical. Inside the country, there is practically no forest left," said Sebastien Balouki, director of the NGO Reboisons Vite le Togo (RVT) dedicated to reforestation.

"Everything has been destroyed for firewood and charcoal making. We must act quickly."

A forest code approved in 2008 provides for prison sentences ranging from one month to two years and fines of 20,000 to 1 million CFA francs (approximately $31 to $1,560) for offences committed.

But in Togo, where 60 percent of the rural population live in the greatest poverty, it is difficult to enforce such a law.

"The penalties vary according to the extent of the destruction. But the text suffers in its application," said a Togolese environment ministry official, who requested anonymity.

Togo is not alone on the continent.

Nearly one billion Africans do not have access to a clean source of energy for cooking, according to a report by the Mo Ibrahim Foundation published in 2022.

According to the same report, air pollution from wood smoke was also responsible for the premature death of half a million Africans each year.

Togo's government is making efforts. A reforestation operation started on June 1, with the goal of planting least 23 million seedlings by the end of 2022.

"The government has finally heard our cries, by decreeing a reforestation campaign," said RVT's Balouki.

The longer-term objective is to reach one billion plants by 2030.

NGOs and associations, state services and several large companies are mobilising for reforestation operations on open spaces in Lome and other areas in the country.

"Our ambition is to achieve 25 percent forest cover," according to the minister of environment and forest resources, Katari Foli-Bazi.

"We have all the assets to succeed in this project, and our first strategy is mobilisation," he said.

To motivate the population, the government has rewarded in recent weeks the three best re-foresters from all regions of the country.

But reforestation is not enough without slowing deforestation, which is difficult when reliance on wood is so great.

As part of those efforts, authorities have embarked on a campaign to promote improved stoves -- locally-made cookers that are very economical in charcoal consumption.

The cookers are made using recycled galvanised sheet metal and ceramics. The government has distributed 1,500 in seven villages including Ando-Kpomey.

Rodolphe Teko makes ovens designed to reduce use of charcoal -- a resource that is driving deforestation. By Matteo FRASCHINI KOFFI (AFP)

"And experience has shown that improved stoves can significantly reduce pressure on trees."

In Ando-Kpomey, energy-intensive cookers have already been abandoned, and their remains tossed out of homes are still visible here and there.

Rebecca Agbogla now prepares meals on her improved stove placed on the ground in front of her hut.

Even more than an ecological alternative, for Agbogla, it is above all a source of savings.

"I use twice, even three times less charcoal in one week than our terracotta cooker," she said.

You're a strong tree; you'll stand through every storm — Kof...
6 minutes ago

Claims linking Akufo-Addo to galamsey are slanderous, plain ...
30 minutes ago