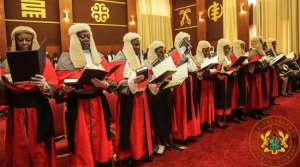 The NPP Germany branch has accused the main opposition NDC of peddling lies and deception following the recent appointments of some Supreme Court judges by President Akufo-Addo pending parliamentary approval.

A former Ranking Member of the Constitutional, Legal and Parliamentary Affairs Committee of Parliament, Mr Inusah Fuseini, has expressed worry that President Nana Addo Dankwa Akufo-Addo, in his view, continues to appoint his party members to the Supreme Court.

Reacting to the nominations on 505 News on Class91.3FM, Mr Fuseini made reference to an earlier appointment of Justices to the Court of Appeal by the president, in which two of the nominees were allegedly cited as being members of the New Patriotic Party (NPP).

“It is definitely worrying that the president has chosen to appoint people who contested on his political party ticket in elections in the parliamentary primary and even parliamentary elections”, Mr Fuseini said.

In a press statement issued on Tuesday and signed by the NPP Germany Communications Director, Nana Osei Boateng, he noted that there is a stipulated criterion for which one must meet before he/she can be appointed to the Supreme Court as a Justice.

He added that there is nothing unlawful about the President’s decision.

“The modalities and procedures for appointment are engraved in the Ghana 1992 constitution and have not changed,” the statement added.

JUDGES APPOINTMENTS TO THE SUPREME COURT IS NON-PARTISAN

Lawyer Inusah Fuseini and some NDC folks have found a new deception catalyst in the appointments made by the President to the Supreme Court of Justice.

Their new lie and deception is that the President of the Republic is appointing NPP party folks to the position of Supreme Court Justice.

First of all, this is not factual. There is a stipulated criterion for which one must meet before he can be appointed to the Supreme Court as a Justice. The modalities and procedure for the appointment is engraved in the constitution and have not changed.

If the NDC had any sense of intellectual honesty in this matter, they should be challenging the wrong they say has been done, based on the constitution and the procedures not the persona of the appointees and their own classification of appointees as party people.

It is incongruous with what has been done and their duty as opposition.

Many citizens have kicked against their way of handling things. When Jerry John Rawling had power in 1992 under a new constitution, he appointed almost everyone on the Supreme Court panel, he appointed more than half of the judges in our courts before he ended his term in office. Does that have any bearing on the judges in their service to the nation? Absolutely no.

Inusah Fuseini and the NDC in their quest to taint government as selfish and planners of an unrealistic grand scheme finds this as another tool to derail the people of Ghana from focusing on nation building at this material moment.

The President shall continue in his seat and rule as President of the Republic and not of NPP. For the betterment of our nation and not for our party only. All naysayers and detractors can do all they can but the battle is still the Lord’s.

Building back together a prosperous Ghana!🇬🇭