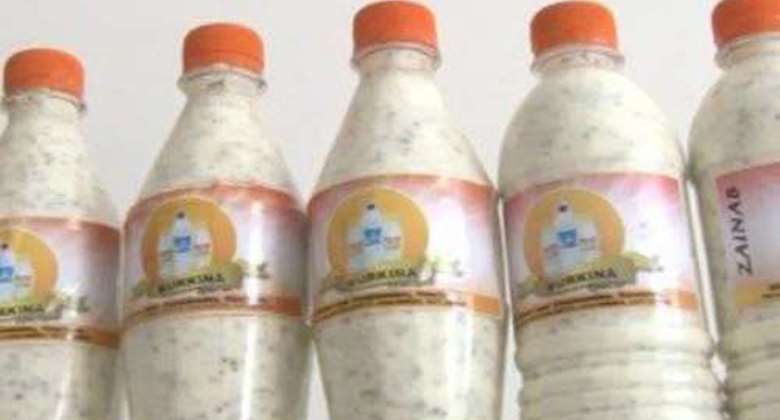 High levels of aflatoxins that can lead to cancer over continuous intake have been found in the locally made millet and diary milk drink, 'Burkina'.

Researchers at the Noguchi Memorial Institute for Medical Research at the University (NMIMR) who released the findings of a study published in the Ghana Medical Journal, said the samples tested contained unacceptable levels of aflatoxins that can cause cancer.

Toxicologist and the lead scientist at the NMIMR, Prof. Regina Appiah-Oppong, said the study sought to investigate levels of aflatoxin- highly toxic substances produced by a fungus known as Aspergillus- in 'Burkina'

She indicated that for the study, 'Burkina' samples were purchased from 'Burkina' producers monthly over a period of 7 months.

She said 21 samples were collected from each site, including Nima and Ashaiman in Accra, to be tested.

After testing, she said the scientists found that a sample from Ashaiman and two others from Nima had high levels of aflatoxin (AFB1) above the acceptable limit.

“Twelve dairy milk samples from Ashaiman and 10 from Nima had levels of aflatoxin (AFM1) above the acceptable limit.

Some of the 'Burkina' samples tested were contaminated with aflatoxin and all doses of aflatoxins have a cumulative effect on the risk of cancer,” she indicated.

Similarly, aflatoxins (AFB1) were found in two millet samples from Ashiaman and six from Nima.

“Based on these results, it is prudent to avoid feeding infants with Burkina since their bodies are more sensitive to toxic insults.

Also, farmers and 'Burkina' producers must be educated on good storage practices and monitored by the regulatory agents to protect the public from aflatoxin exposure and toxicity,” Prof. Appiah-Oppong said.

Hottest Photo Reports
Catch up with all the political quotes from our politicians.
Advertise here
More from Health
ModernGhana Links
The Agenda 111 Hospital Projects in Kukuom, Kenyasi will be completed on time — George Boakye
YEA to recruit 5,000 SHS graduates by end of August to help nurses on CHPS compounds
Minority urges government to withdraw 30% reserve admissions into nursing training colleges
TOP STORIES