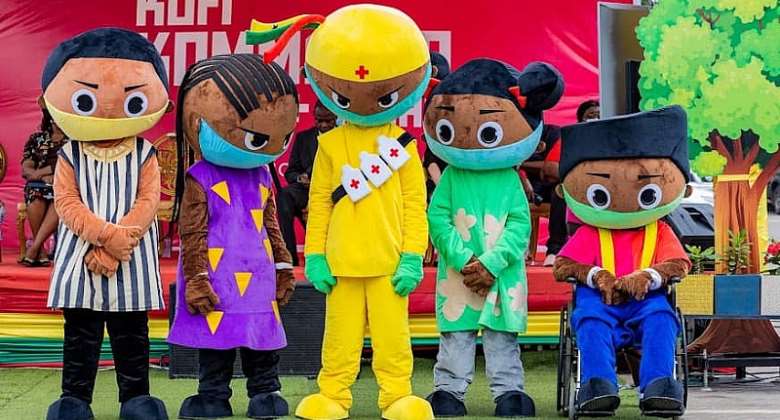 The Accra-based Mullen Lowe group, in collaboration with the Ghana Health Service (GHS), the Ghana Education Service (GES), and other partners, has launched an animated series titled "Kofi Komando and Squad."

On Wednesday, August 3, the animated series was outdoored at the forecourt of Accra's Ebenezer Presbyterian Church.

The project, according to Mullen Lowe and supporting brands is aimed at increasing children's interest in health-related issues, particularly the COVID-19 pandemic.

GHS, GES, UNICEF, the Embassy of Denmark and the Canadian High Commissioner delivered opening remarks at the launch, expressing gratitude for the opportunity to support such an incredible project and reiterating their contributions to the country in the health sector.

They all called on parents and teachers in various educational institutions to make it a priority to see that children find interest in the series.

Delivering the keynote address at the premiere, the Minister for Information and the Member of Parliament (MP) for Ofoasie Ayirebi constituency, Kojo Oppong Nkrumah applauded the innovative prowess of Mullen Lowe and their partners for coming up with such a brilliant piece.

He further charged them not to rest after this but focus on exploring other sectors of Ghanaian society.

“I want to encourage you to be innovative with your content. Today you may be starting with COVID, but there are many other health-related subjects like the Monkey Pox, Marburg virus, and others that we will be looking forward to seeing you explore,” he noted.

Mr. Oppong Nkrumah ending his speech called on parents and the Ghana Education Service to see to it that children find interest in the 'Kofi Komanado and Squad' animated series.

Briefing the gathering about the series was the Managing Director (MD) for Mullen Lowe Accra, Mrs. Norkor Duah, who read the overview of the series.

According to her, the series is made up of five (5) characters whose names were drawn from the five (5) major ethnic groups in the country.

The characters are Kofi, the group leader and a very energetic young man who is always ready to offer good ideas to his squad; Adzo, a very smart and computer-literate young lady; Naa, one of the jovial characters in the series and an all-round person who knows almost everyone in society.

It also features Issah; a very hygienic, big-hearted and always wearing a smiling face, he always appears hygienic, and Keku, a very cool and good-looking guy among the squad who always has a nice haircut. Keku is also physically impaired.

Anchoring the premier was Miriam Osei-Agyemang, a broadcast journalist with Media General and co-anchored by Nakeeyat Dramani, the 2019 TV3 talented kid winner.

Other sponsors of the project include the United Nations International Children's Emergency Fund (UNICEF), the Canadian High Commission in Ghana as well as the Canadian Embassy in Ghana.

Mullen Lowe Accra is an integrated marketing communications network with a strong entrepreneurial heritage and a challenger mentality.