Stephen Ntim: A Seafarer On The Captain’s Bridge 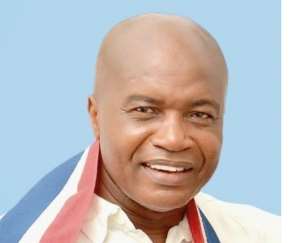 “An achievement is bondage. It obliges one to a higher achievement”-Albert Camus.

IF A captain of a ship takes over from another captain who had steered the ship from troubled waters and anchored the vessel in safety, that new captain has a Herculean task to perform. His new dwelling place becomes the Captain's Bridge, where he pitches camp and constantly looks through his binoculars when he sets sail again. His heart beats faster anytime he sees a storm gathering. Confused? Wait a moment while I refill my fountain pen bequeathed to me by my late centurion father.

If there is anyone who should be praised for bringing the NPP this far for the past six years, that person should be Mr. Freddy Blay, the immediate past National Chairman of the party. In 2016, the party had gone to congress to elect constituency, regional and national officers. A very competitive flagbearer race took place and the party was on the campaign trail to grab power from the NDC. Ghanaians woke up one morning to hear that the then National Chairman, Paul Afoko, the General Secretary, Kwabena Adjei Agyapong and the 2nd National Vice Chairman, Sammy Crabbe, were suspended from the party indefinitely. Supporters of the party were shocked to the marrow and the dream of winning the 2016 elections became a bleak one. Hopes were shattered. No reasons were given for the decision and so the people were kept in limbo. It was the first decision of its type of a political party in the 4th Republic, if not all the other republics.

When Mr. Freddy Blay was ushered into the Captain's Bridge to steer the ship from the stormy waters, many people, including yours sincerely, did not have any hope that the distressed ship could be salvaged from the troubled waters. Supporters of the party sat on thorns and hard times and defeat beckoned. The NDC, particularly, Mr. John Mahama, became very happy for what had befallen the NPP. That was when Mr. Mahama referred to Mr. Freddy Blay as “Opana” and candidate Nana Addo as an intemperate person who could not rule a nation. The new chairman picked up the pieces and in no time, the ship gathered momentum and was able to get out of the stormy waters. Candidate Akufo Addo went on to win with a surprising difference of more than one million votes. That was the magic of 'Opana' and his team of dedicated and hardworking officers. (Don't ever screw with Nzema wizards!) I throw way salute, Captain Blay!

Captains don't just climb the gangway, walk into a ship, climb up to the Captain's bridge and start sailing. They need to be thoroughly briefed by the Chief Mate before setting sail. In this case, I am the self-appointed Chief Mate of MV Patriotic. Pay rap attention, Captain Ntim and welcome on board MV Patriotic, a ship loaded with goodies, sailing past the Bermuda Triangle to the Eldorado. Ship Ahoy!!! Mr. Ntim has the world on his shoulders. He has no choice but to put his shoulders to the wheels to push the party forward towards victory 2024. People often say they “hit the street running”, which is another way of saying they did their prep work and were ready. After contesting the National Chairmanship position for five times before winning, I want to belief Mr. Ntim has done his prep work well. Sadly, times have changed and Mr. Ntim must swim along with the tidal waves.

In the run-up to the NPP National Delegates Conference, almost all the contestants to the various positions had Unity and Breaking the Eight as their messages to the delegates, which was good. The theme for the conference itself was “Holding Together, Working Together”, which was equally perfect. But the multi-million question is: How do we achieve these lofty ideas? Through lip service or wishful thinking? The theme for the conference should be the first task of Mr. Ntim. It was Henry Ford, who said 'coming together is a beginning, keeping together is progress, working together is success'. At the Kumasi Annual Delegates Conference, President Akufo Addo said something which the party should use as a guidepost. Listen to him: “It is for the NPP to lose the 2024 General Election”. It was a paradox which needs to be taken seriously. In other words, the President wanted to tell the delegates that if the NPP puts its house in order, it will not lose the 2024 General Election. Simplista!

The situation in the constituency and regional offices has the same problem. Candidates who lost are not happy because they believe there were arm twisting and money influence. A great number of them has threatened to sit on the fence and that is dangerous. For the sake of Breaking the Eight through unity, there is the need for Mr. Ntim and his team to move in quickly and cool down tempers. Delay defeats equity, so says one of the Maxims of Equity. Above all, all former officers of the party, from 1992 to date, should be brought on board. They have so much to offer in terms of experience. After all, did the sages not say experience is the best teacher? Me and my pontification!