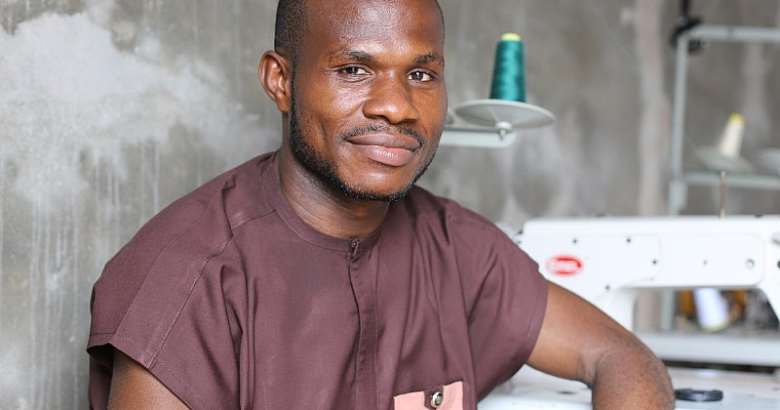 Lagos, 1 August 2022 – Ejike is busy finishing orders in his workshop at Ijegun market in Lagos. He is dressed neatly, wearing a brown self-made modern Nigerian attire. On the first floor of a small breezy workshop along one of the busy market streets, he and his two employees work tirelessly to meet their clients’ demands. They have a large number of orders from clients who are fond of his designs.

“This week we will reach 2,000 pieces of clothing, plus some more, which will be sold at the market nearby. Thank God the business is going well.”

The 33-year-old did not always enjoy this level of success. Five years ago, he was struggling to make ends meet. The clothes and fabrics he was selling back then were barely yielding enough to feed his elderly parents. His back was against the wall and, pressed by the dire need to continue providing for his family, he decided to leave Nigeria in search for greener pastures in Italy.

Without proper documentation, Ejike was forced to use irregular channels and paid close to NGN 1 million (approximately USD 2,400) to smugglers for the trip from Nigeria that took him to Libya where he was either hiding from the authorities and criminal gangs, or kept arbitrarily in detention camps as he was waiting for the chance to cross the sea. Days would go by without food and water.

When the day came to attempt the journey across the Mediterranean, he and other migrants were taken to a camp in Qaraboli near Tripoli where they were stripped of all their belongings or documentation and forced into a flimsy rubber dinghy.

“From that spot, the trip lasts much longer but there are fewer chances to be arrested.”

As night fell, high waves rocked the boat, pushing some of the migrants into the water. By morning, they realized 14 people had gone missing.

“I don’t want to travel again in this way, only in an official way,” Ejike says, recalling his decision to return to Nigeria. “I had enough of Libya, I wanted to go home after all this suffering.”

He returned on a voluntary humanitarian flight organized by the International Organization for Migration (IOM) in March 2018, after being rescued from the Mediterranean by the Libyan Coast Guard and taken back to Libya where he spent 10 months before his return to Nigeria.

“If I had the right information, I would never have done that. I wasted so much money on this trip,” he reflects.

Upon return, Ejike spent the first months in Lagos, close to his younger brother who has a small convenience store. He was informed by a fellow returnee about the trainings IOM offers to returnees as part of the reintegration assistance upon return but he was hesitant. He was determined to start his own business and wary of outside support.

He focused on learning how to tailor, using sewing machines which he borrowed from friends and acquaintances. It only took him a few months to perfect his skills – his inspiration drawn from one of the darkest times of his life. “It was during the course of the journey when I got the idea for a fashion design business. I wanted to start something of my own.”

Ejike and his two colleagues at the workshop in Ijegun Market Satellite City in Lagos. Photo: IOM 2022/Stylia Kampani

Eventually, after much convincing from another friend, Ejike, however skeptical, decided to give it a try.

Through the sessions, his interest grew as he honed his skills and techniques that proved useful to his dream of setting up a business. The practical training exposed him to business skills including the development of a business plan, marketing strategies, and managing finances.

He went on to qualify for financial support from the European Union to start his business at Ijegun Market Satellite city in Lagos.

“I used the grant to purchase tailoring items and machines for my business. I was so glad for the support from IOM.”

Today, he is not only self-sufficient but has also employed two staff and is considering expanding the business.

“I don’t want to be a regular tailor, my target is to have a chain business. There are ups and downs, but I believe that I will get there.” Besides the on-demand orders, he has a stall at the market area where he sells ready-made garments.

The view from the workshop. Photo: IOM 2022/Stylia Kampani

“I have confidence in myself. I want to build something that will have my name on it.”

His next plan is to open a small showroom with his designs and be able to host customers in a nice environment. His ultimate dream is to open stores across the country and have his own brand name.

“From the beginning of his reintegration process, Ejike demonstrated exceptional motivation and strength to rebuild his life and become an entrepreneur. He is passionate and loves his job; that’s why I believe he will thrive even more. He is one of IOM’s success stories,” says Peace, IOM’s case manager who has been following his reintegration process and well-being closely.

Ejike is one of the 13,000 Nigerian returnees who, since April 2017, have received reintegration assistance under the EU-IOM Joint Initiative.

This story was written by Stylia Kampani, Public Information Officer at IOM Nigeria.