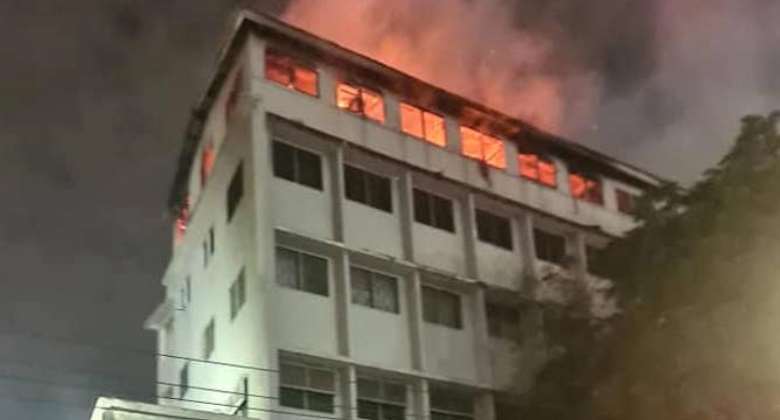 The Ghana National Fire Service (GNFS) has reported that the fifth floor of a storey building at Tudu in Accra has been gutted by fire this dawn.

The building called the Yazz hostel houses some students of the Accra Technical University.

Students were said to be sleeping when the fire started, however, no casualties were recorded.

Speaking to Citi News, Director of Public Relations at the Ghana National Fire Service, ACFO Timothy Osafo-Affum indicated that the cause of the fire is yet to be ascertained by the officers whose swift response to the emergency prevented the fire from extending to other floors.

“We received a distress call around 11:30 pm of a fire incident at American House, Tudu. When we got there, we realised that the fire started on the last floor. We quickly called for a ladder to access it. We were able to prevent the fire from spreading. It took us two and a half hours to stop it. However, the top floor has been badly affected, including the roof.”

“We do not know the cause of the fire yet. Fortunately, there was no casualty,” he added.

Latest Photo Reports
Catch up with all the political quotes from our politicians.
Advertise here
More from Social News
ModernGhana Links
Lack of toilet facility in a school causes pregnancy of 15-year-old student
The law will deal with you if you failed to pay your tax — Jaman South MCE
Arise Ghana demands suspension of utility tariffs, removal of Ken Ofori-Atta
TOP STORIES