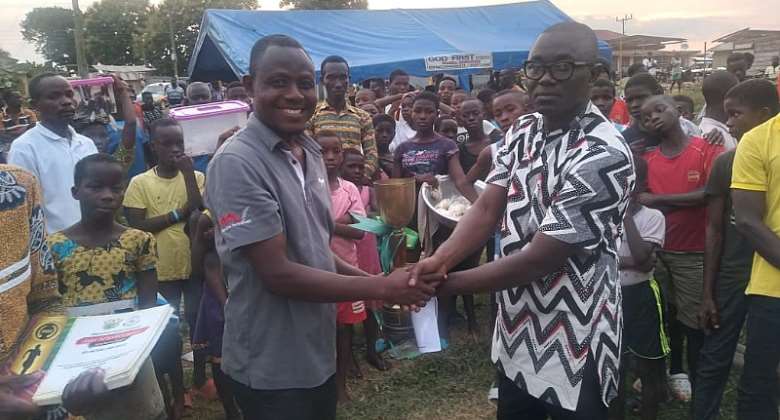 Wassa East District Assembly has supported an inter-school sports festival as part of measures to rekindle and promote sporting activities at the basic school level where many young talents can be nurtured, developed and managed for future prospects.

Presenting sports kits such as football, trophies, jerseys and certificates worth more than GHS20,000 at the Wassa East Inter Schools Festival in Ten Circuit, the District Chief Executive, Hon. Emmanuel Boakye said notable sports personalities in Ghana today were discovered during school sporting activities such as the one today.

He added that some were offered admission to pursue secondary education in schools of reputable status due to their talent.

The DCE further said many young people have talent that need a platform to be unearthed and showcased to the world.

He added that the sporting festival will enable them showcase their talents however the school curriculum and other challenges have become an impediment.

The DCE disclosed that among many priorities of his administration, sports will play a pivotal role, explaining that apart from projecting the image of the District, it will also promote the socio-economic development of the people.

According to Hon. Boakye, sports can also create jobs for many such as sitting athletes, footballers, coaches, referees, agents, stadium vendors and their employees, and front-office personnel among many examples of available jobs in the industry.

He stressed that economies that invested in sports, especially at the school level are reaping the benefits today. “Until a conscious effort is made to develop the sports in Ghana, the economic impact of the industry will not be realised," he stated.

He appealed to Educational Directorate to make sports an integral part of their annual calendar to unearth talents for the District.

Some of the circuits the Chief Executive visited include Ateiku, Old Subri, Senchem, Wassa Essaman and Sekyere Krobo.