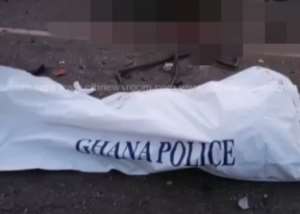 A woman believed to be mentally challenged has allegedly stoned a young man to death on the 2nd tier of the Kwame Nkrumah interchange in Accra.

It took the swift intervention of police personnel from the Nima District Police headquarters to prevent her lynching by some youth.

According to eyewitnesses, the woman started throwing stones at moving vehicles and when they saw the young man following her, they assumed he was going to stop her from causing an accident.

Within a few minutes, they realised the woman overpowered the young man and killed him with a cement block.

This was confirmed by Citi News sources at the Nima police station.

The Nima district police commander declined to comment on record, but only assured that they will investigate the incident.

At the time of Citi News arrival at the police station, the woman had been handcuffed. She was later sent to the psychiatric hospital for examination.