KNUST: A Toast To The "iron Lady" Of KNUST 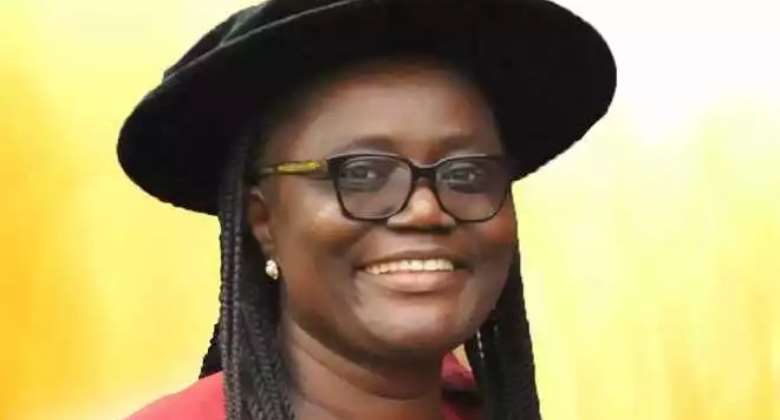 Follow Ghanaians, it is said that men claim they can't trust anything that bleeds five days every month without dying and hence women can't be trusted. But I beg to differ in the case of Professor Rita Akusua Dickson, the first female Vice Chancellor (VC) of the Kwame Nkrumah University of Science and Technology (KNUST), and other great women of her likes who have distinguished and place themselves above this narrative.

Besides, our elders say if a man discovers a python and a woman kills it, it doesn't matter who did what? It's our safety that matters. Of course, such women of courage in our social milieu are usually accused of witchcraft. Nevertheless, this former Wesley Girls' High School student from St. Monica's Secondary School to Kings College in London for PhD and with both her Bachelor’s (rather Spinster’s degree) and Master's degrees from this intellectual shrine she's currently heading as VC, certainly takes exception. She may be accused of scientific and intellectual witchcraft.

For me, I think "anatomy has to be blamed for the inability of men to see the hearts of women being full of courage and trust, the breasts are in the way and block their vision". Yet, no man has the right to blame these "natural feeding bottles" in the chest of every woman for both babies and full grown men.

Perhaps, for both students and alumni of the Kwame Nkrumah University of Science and Technology today, August 1, 2022, is exceptional Mother's Day as their Margaret Thatcher, their Angela Merkel, and their modern-day Mother Theresa, all rolled into one in the personality of Prof. Rita Akusua Dickson is clocking 52 years of academic and intellectual consummation.

It is often said that "working mothers are the guinea pigs in a scientific experiment to show that sleep is not necessary for human life". Hard work.

This is the case of the record-breaking first female Vice Chancellor of KNUST, Mrs Prof. Dickson, who has vowed to change the diapers of leadership of Africa from her own corner as a Mothering Vice Chancellor.

Happy gracious birthday to you Madam.

For the two years she has been handed the mantle, the Phytochemist has simply taken the leadership of KNUST to a make-up studio for beautification, the kitchen to be garnished, and probably, into the bed-room where it's rumored that every woman is the unquestioned master-cum-dictator.

Prof. Rita is undoubtedly our own "Iron Lady" the former Prime Minister of Britain (Margaret Thatcher) who was nicknamed "the Iron Lady" by a Russian journalist. Not because she is also a Chemistry expert like Margaret Thatcher whose leadership was motherly and caring at the same time tougher having won the Falklands Island war against Argentina, and adopted financial and economic policies in conjunction with USA President Ronald Reagan in the 1980s. Prof. Rita is also a mother who combines household duties with cosmopolitan leadership like Thatcher’s that softened life for citizens of both USA and Britain.

As official career breeder and a "Domestic President", Prof. Rita has cross-fertilized ideas from motherhood, kitchen (well, mention that, too) the "bedroom", to produce a hybrid form of leadership style that is lacking in the leadership of Africa: honest, visionary, enduring, and continuity of leadership.

An English proverb has it that, "adversity makes some people breakdown, and others break records." It isn't therefore entirely surprising as both a record setter and breaker, that Prof. Rita has not "broken down" by the current economic crisis.

While some leaders are profusely sweeting and asking for cover anywhere it can come from, the service of the VC to the university community has been resolute and firm. Despite the skyrocketing fuel prices, the "Campride" (the university shuttles) are in full operation; the Ultra Modern Library which upon completion would take the position of the Mother of all libraries in West Africa, if not the entire continent, is still ongoing.

For me, it is not when she decided not to embarrass those of us who couldn't afford to pay our fees in examination halls where students owing the school could be shamed out, but her decision to extend the deadline generously. Elsewhere, students' dignity has been wounded by sacking them out of exam halls for owing. Perhaps, as a mother, she recognized that the economic tension in the country could have spurred the situation of many students' inability to pay their fees, and not careless football bet (MyBet).

The move by the university to allow students to stay by extending time of payment of fees really saved many parents from shame in a society majority of neighbors are always happy to see no smoke from neighboring homes because they couldn't afford to cook.

This enduring leadership is happening at a time a full government of the country can't even fund a cathedral building it promised the Almighty God.

Yes, KNUST, too, is affected by the current global economic disaster. It takes vision to plan one's life to withstand unpredictable shocks and problems. Exactly what the mom and her entourage did.

Moreover, mom you have demonstrated that one doesn't need to downgrade, thwart, and defame the legacies of predecessors in order to carve their own niche. You clearly don’t believe in the game of eclipsing other stars in order to shine. Indeed, it takes intelligence, courage, vivacity, incredulity, and the milk of human kindness to "apply fertilizer" to seeds sown by others and not to water them down simply to have yours planted.

Your vision of SONSOL to support needy but brilliant students with laptops is certainly a plus to your name. As a 1994 year group graduate, you have no idea what the lack of a laptop as a student means in a university class quizzes and assignments seem the only way of instructions.

Personally, I have experienced with bitterness having to survive academically without a laptop when my laptop broke down for almost an entire academic year (2020-2021) as a Master's degree student.

The library became my second hostel. Thanks to the modern ICT facilities at the Prempeh II Library of the University.

I say kudos and Ayikoo to your soft, tenderly, but strong and firm leadership with impeccable vision.

Some Problems in the University

Furthermore, one thing very pressing I like to bring to your attention on campus is careless driving. Without mincing words I believe our roads have become death traps. I trust the university has not yet noticed this great danger.

The last year's killing of a certain MP's son in a car accident on campus was blamed on Satan. But ma'am trust me, the jet speed with which careless drivers and riders are using our usually densely populated roads by students on campus during lectures time is very dangerous. Just two days ago (July 30, 2022) a car crashed into the safety pedestrian walkway pillars and somersaulted to the other side of the road upside-down uprooting many of the pillars. This happened around Katanga Hall just right behind the Main Administration Block. If you had been in your office around 5pm there about you might have heard the terrible blast that the crash produced. I was around Queen's Hall but I heard it very loud and clear.

My personal inquiries when I went to the accident scene suggested nobody was hit and the victim(s) were rushed to hospital. But the car was badly damaged. The damage suggested the car somersaulted more than once when it fell. Which further indicates that the car was at a top speed.

The accident happened between the hours of 5pm to 6pm and a weekend. But at the scene I kept imagining if that had been lectures hours and students around the Brunei Hostel area were returning to hostel or going for lectures. It would have been more catastrophic.

Mom, I know student drivers only should not be blamed for this careless usage of our roads on campus. "Delivery Boys" deliver packages ranging from foods and other items ordered by students, including other motorists. And these outsider users of roads are the worst offenders, driving or riding at unfortunate speeds.

I therefore propose that something should be done about this by holding careless users responsible. Seizure of vehicles and motorcycles to heavily fining drivers and riders can help tone down this anomaly. For instance, the victim(s) in the recent accident I mentioned can be fined to replace the pillars that their careless driving uprooted. The plenty Closed Circuit Television (CCTV) cameras can help to track down guest users.

The last thing I will draw your attention to is the campus river. Please the University shouldn't give up on it. In few years, we can have the like of the London Bridge over it as a science and technological institution where cars shall stop for it to automatically be folded for a ship to pass.

You notice that some of the nearby community folks are now fishing from it. It has the potential of generating income for the University if water can always be maintained in it, especially raining seasons.

I can't wait to see it named after you, "Prof. Rita River". I have noticed your relentless effort to expand and dig it into a shape more befitting of the University’s status.

Until then, may the Almighty God see you through your leadership journey as a celebrated VC.

I must add that Ghana needs the leaders of the intellectual communities like you to save her from the manacles and shackles of political scavengers. I think it's in this light your colleague Prof. Naana Jane Opoku Agyimang has stepped into the play to help rescue Ghana from greedy leadership.

Ma,am, our politics is dirty, but "a wise one who refuses to participate in politics would be led under the government of the foolish and idiots." Is it not pathetic that people like you are citizens of a country with this degree of suffocating leadership? This (VCship) can't certainly be your limit.

"The one sitting on power does not possess the power but what surrounds the power is what possess the power" says Minister Louis Farrakhan. This is particularly true when you were the Pro Vice Chancellor under your immediate predecessor, former VC, Prof. Obiri Danso. It was obvious that your unflinching support counted in his most amazing leadership which wicked and evil envy led his detractors and traducers to crash. Yet no drought can ever dry the divine crop of the Lord.

The University Council Chairman the Omanhene of the Bompata Traditional Area, Nana Effah Appenteng, His Royal highness the Asantehene, the Pro Vice Chancellor, and other veteran administrators remain your pillars in this your leadership voyage. May the Almighty God continue to help, protect, guard and guide your leadership from malicious envy.

We are very proud to have you as the leaders of our intellectual community.

Mr. University Council Chairman, your Royal Highness the Asantehene and Chancellor of the University, all the other 12 members of the 14-member council of the University including Dr Abdul Samed Muntaka, the Pro Vice Chancellor, Prof. Ellis Owusu-Dabo, Lecturers, Alumni, Informal Staff, Well-wishers, Fellow Students of KNUST, Ladies and Gentlemen, please join me raise a toast to the good health, long life, victory, more prosperity, and more knowledge, of Professor Rita Akosua Dickson, our sweet mother and Vice Chancellor of the best University in West Africa.

GES must constitute a new team to handle computerised school...
2 minutes ago