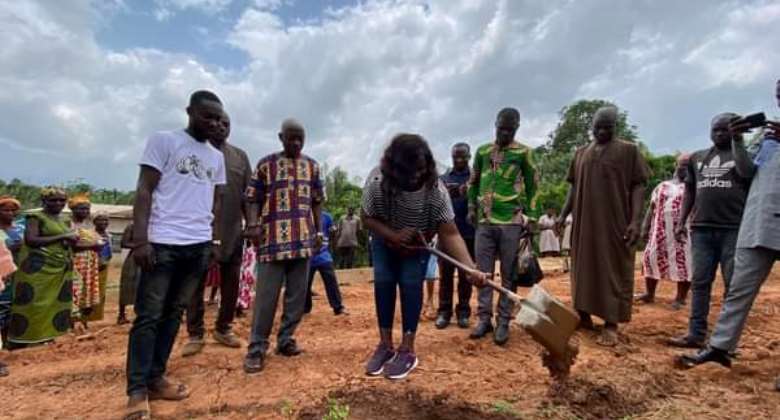 The District Chief Executive for Agona East in the Central Region, Hon. Janet Odei Paintsil has cut sod for construction of two facilities in her District to enhance healthcare delivery.

They are an ultra-modern Community Health Planning and Services (CHPS) Compound for Agona Duotu community and a 3-unit classroom block for Agona Tawora Basic School.

Addressing the Chiefs and people of Duotu last Thursday, the DCE expressed her gratitude to His Excellency Nana Addo Dankwa Akufo Addo led NPP Government for the facility describing it as a God-sent.

She noted that the facility when completed, would serve several communities and facilitate effective teaching and learning.

Hon. Janet Odei Paintsil disclosed that the CHPS Zone Compound would be completed before the close of the year.

She noted that it would be fully equipped with medical beds and logistics couple with all the social amenities like water, electricity and accessible road network.

"Nananom, am happy to be associated with this project especially when am the DCE representing His Excellency the President of the Republic of Ghana, President Akufo Addo.

"The NPP Government is committed to improving healthcare delivery to enable the people easy access to health facilities.

"The Agona East District Assembly is also poised to ensure that every resident in the District gets quick healthcare delivery without stress whatsoever ever.

"I want to encourage the contractor to expedite action for early completion of the project and also appeal to Nananom to give him the maximum cooperation to facilitate his job," she intimated.

Assembly Member for Agona Duotu Electoral Area, Hon. John Kwesi Akyea expressed his gratitude to the NPP Government for the facility which would be the first of its kind in the Electoral Area.

He noted that the youth would assist in anyway possible to ensure early completion of the CHPS Compound.

Chief of the community, Nana Kofi Asopiah IV, said the people were overwhelmed by the facility. "We appreciate this edifice which when completed, would solve most of our health needs.

"We have to travel to Agona Duakwa Salvation Army Health Center, Kenyanko CHPS Compound to receive medical care or proceed to Agona Swedru Government Hospital Incase of emergency. The NPP Government has been kind to us and we really appreciate it."

A resident of the Agona Duotu Community, Madam Ewura Ama also praised the DCE and President Akufo Addo for the project adding it was going to improve the health status of the people who are mostly farmers.

She however appealed to the DCE to assist the community gets potable drinking water to address the water issues in the area.

According to Madam Ewura Ama, the Community Water and Sanitation Agency was proving water for the community but stalled making access to portable drinking water stressful to the people.

Later in the day, Hon. Janet Odei Paintsil also cut the sod for a construction of a 3-unit classroom block for Agona Tawora Basic School.

The project would enable pupils easy access to Junior High School education for the first time.

Previously, the pupils had to walk several kilometers from the community to attend school at Agona Nantifa.

According to Hon Janet Odei Paintsil, the project was in fulfilment of NPP Government's promise of providing conducive environment for effective teaching and learning across the country.

"Education is NPP Government's top priority to ensure accessibility to every child of school going age thus the implementation of the Free SHS policy.

"We in the Agona East District Assembly will implement every policy and programmes aimed at improving the lives of the people in every sector of the economy," the DCE emphasized.