'You did same, I wish Despite sack you too' — Netizen jabs Afia Pokuaa for 'jubilating' over Adwoa Safo’s dismissal 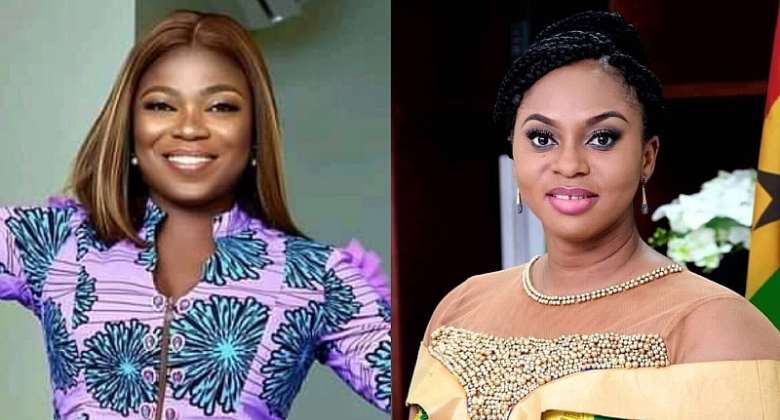 Despite Media’s journalist, Afia Pokuaa aka Vim Lady was on fire after she posted Gender Minister Adwoa Safo’s dismissal statement issued by the Presidency with the caption "Finally, Finally."

A Facebook account with the name Osagyefo Kwadwo Ansong descended on her, saying she also deserves to be sacked for vacating her duties and hosting virtual shows abroad.

In Vim Lady’s comments section, sighted by Modernghana News, the netizen wrote, “I’m happy the President has done that how I wish Kwame Despite will also learn from this. Cuz finally finally you are doing same.”

As readers may recall, a verbal feud arose between Afia Pokuaa and one of the seasoned Despite Media employees, Kwame Nkrumah Tikese.

Tikese stated on his Ade Akye Abia show on Accra-based Okay FM that Vim Lady was paid a large salary but chose to host virtual shows that are outside her mandate.

"I learnt she is being paid huge sums of money at the end of the month. We are not saying this secretly, we are doing this live on-air so, if anybody will record, let the person do so...because, at multimedia, you would not have been allowed to do that, so, why will you do it to us? You are using the kindness of Osei Kwame Despite and Fadda Dickson to be their weakness...," Kwame Nkrumah Tikese stressed.

He adds "The programme has dilated with the people in this country but the people you are hosting from outside the country are not in touch with the current situations of the country. Some have stayed outside for more than 30 years; even the sound quality is poor.”

Kwame Nkrumah Tikese also dared Vim Lady to leave the station after two weeks if she refuses to resume her full duties at the station.

The Dome-Kwabenya Member of Parliament (MP) who doubles as the Minister for Gender, Children and Social Protection, Sarah Adwoa Safo has been out of the country since December 2021.

After many attempts to bring her back failed, the President revoked her appointment as Gender Minister.

In a statement issued and signed by Mr. Eugene Arhin, the Director of Communications at the Presidency, it noted that “In accordance with article 81 (a) of the Constitution, the President of the Republic, Nana Addo Dankwa Akufo-Addo, has revoked the appointment of Hon. Sarah Adwoa Safo, Member of Parliament for Dome Kwabenya, as Minister for Gender, Children and Social Protection, with immediate effect."

It continues “The Minister for Sanitation and Water Resources, Madam Cecilia Abena Dapaah, will continue to act as caretaker Minister for the Ministry of Gender, Children and Social Protection, until such a time that President Akufo-Addo appoints a substantive Minister.”

Meanwhile, her post as an MP is yet to be decided after Parliament resumes from its break in October this year, 2022.

Her colleagues NPP MPs are pushing for Parliament to declare her seat vacant for a replacement.