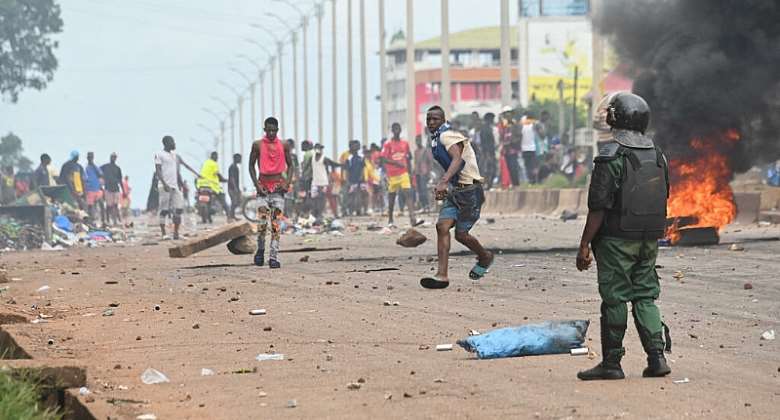 The chair of the West African regional bloc Ecowas said the military junta in Guinea has agreed to reduce its transition to civilian rule from three to two years.This as violent protests against the junta brought the capital Conakry to a standstill on Thursday.

Guinea-Bissau President Umaro Sissoco Embalo, who is chair of the Economic Community of West African States (ECOWAS), said he had recently convinced Guinea's junta to shorten its timeline.

"I was in Conakry with the president of the commission (of ECOWAS) to make the military junta understand the decision of the summit of heads of state that the transition cannot exceed 24 months", Embalo said.

His comments came during a media briefing attended by French President Emmanuel Macron on Thursday.

"They had proposed 36 months, but we succeeded in convincing them," he added.

However, Ousmane Gaoual Diallo, a Guinean minister and spokesman for the transitional government, told French news agency AFP that "neither the government nor the presidency confirm this information about the duration of the transition in Guinea".

An ECOWAS official said on condition of anonymity: "The principle is accepted but we were waiting to formalise it... before announcing it."

A junta led by Colonel Mamady Doumbouya, which overthrew President Alpha Conde in September last year, had pledged to hand over power to elected civilians within three years.

But regional powers rejected this timeline, with ECOWAS suspending Guinea after the coup.

West African mediators last week met Guinea's ruling junta for talks on a return to civilian rule, according to ECOWAS and state media.

Embalo, Gambian diplomat Omar Alieu Touray, who is the president of the bloc's commission, and Benin's former president Thomas Boni Yayi, the ECOWAS mediator for Guinea, were all present.

Earlier in July, ECOWAS leaders had met in Ghana's capital Accra to discuss transitions to civilian rule in Guinea, as well as Mali and Burkina Faso, which together have undergone four coups since August 2020.

They lifted tough sanctions that had been imposed on Mali's military regime, accepting a March 2024 return to civilian rule.

And they agreed to allow Burkina Faso two years for its transition back to democracy.

But discussions until then had been trickier with the rulers of Guinea, where the junta had announced a 36-month transition -- a period that African Union chairman and Senegalese President Macky Sall described as "unthinkable".

On Thursday, protests against Guinea's military leaders brought Conakry to a standstill.

The National Front for the Defence of the Constitution (FNDC) who called the protest said one person had died after being hit by a bullet in the Conakry suburb of Hamdallaye, while several others were injured.

The FNDC is an influential coalition made up of political parties, trade unions and civil society organisations. It called the demonstration to denounce the junta's "unilateral management" of the return to civilian rule after it seized power in 2021.

Authorities have not confirmed the death.
The junta in May banned public demonstrations, and Thursday's protests led to sporadic clashes between demonstrators and police.

Arrest, prosecute galamsey kingpins irrespective of their s...
40 minutes ago

Ablakwa questions whereabouts of chief perpetrator of Bulgar...
40 minutes ago