Senegal to elect parliament in important test for presidential vote 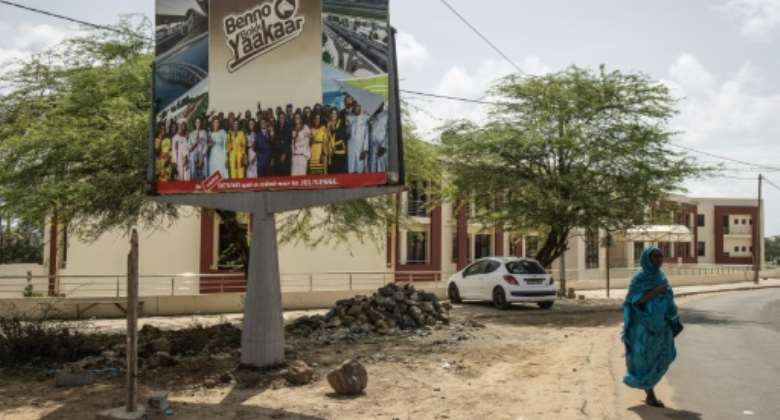 Senegal is gearing up for parliamentary polls on Sunday. By JOHN WESSELS (AFP)

Senegal will vote Sunday in parliamentary elections the opposition hopes will force a coalition with President Macky Sall and curb any ambitions he may hold for a controversial third term.

Sixty-year-old Sall, who was elected in 2012 for seven years then re-elected in 2019 for another five, had remained vague about his plans, but critics have accused him of seeking to break the two-term limit and run again in 2024.

Any defeat of his supporters in Sunday's vote could upset such plans.

The president has also promised to appoint a new prime minister from the winning party, after he abolished the post in 2019 then reinstated it in December.

The single-round ballot will decide the 165 seats of the unicameral parliament -- currently controlled by the president's supporters -- for the next five years.

But several members of the main opposition coalition have been banned from taking part on technical grounds.

National Assembly members are to be elected according to a system that combines proportional representation with national lists for 53 lawmakers, and majority voting in the country's departments for 97 others.

The diaspora elects the remaining 15 members.

Eight coalitions are in the running for these elections, including Yewwi Askan Wi (meaning "Liberate the People" in Wolof), the main opposition coalition.

Its highest-profile member, Ousmane Sonko, came third in the 2019 presidential election. But he has been banned from running in Sunday's elections.

President Macky Sall has remained vague about accusations he will break the two-term limit and run again in 2024. By Nipah Dennis (AFP)

That coalition has joined forces with Wallu Senegal (which means "Save Senegal" in Wolof), led by former president Abdoulaye Wade.

The two groups have agreed that whichever one places lower in each department will support the other, in order to obtain a parliamentary majority and "force governmental cohabitation."

The opposition also wants to force Sall to give up any hope of running in 2024.

"If Macky Sall loses, he won't be talking about seeking a third term," Sonko said following protests in June.

For the government, the parliamentary polls are a second test following municipal elections in March, which the opposition won in major cities, including the capital Dakar, Ziguinchor in the south and Thies in the west.

"It's the first round of the 2024 presidential election," researcher and political analyst Cheikh Gueye told AFP.

The election is taking place against a backdrop of rising food and fuel prices following Russia's invasion of Ukraine.

The opposition says the government has been unable to address the high cost of living.

But the latter says it has introduced subsidies to help people cope with the price hikes, and has a good track record of investing in infrastructure.

The 21-day election campaign, during which giant rallies and noisy caravans criss-crossed the country in a mostly calm atmosphere, ends on Friday evening.

The pre-campaign period, however, was marked by violent demonstrations that left at least three people dead.

One of the names had been accidentally put down both as a first-choice candidate and as an alternate candidate, thus invalidating the entire list.

Ousmane Sonko came third in the 2019 presidential election, but he has been banned from running in Sunday's elections on technical grounds. By SEYLLOU (AFP)

The move banned Sonko and others from participating in the elections.

Declaring it to be politically motivated, the group's leaders called for protests in June, most of which were banned by authorities.

On June 29, the opposition finally agreed to take part in the elections, easing tensions.

But the country was shaken by several days of rioting in March last year, claiming around a dozen lives, after Sonko was accused of rape.

In recent years, several other prominent opponents of the president have seen their political careers cut short by legal cases.

They include former Dakar mayor Khalifa Sall, who is not related to the head of state, and former minister Karim Wade, the son of an ex-president.