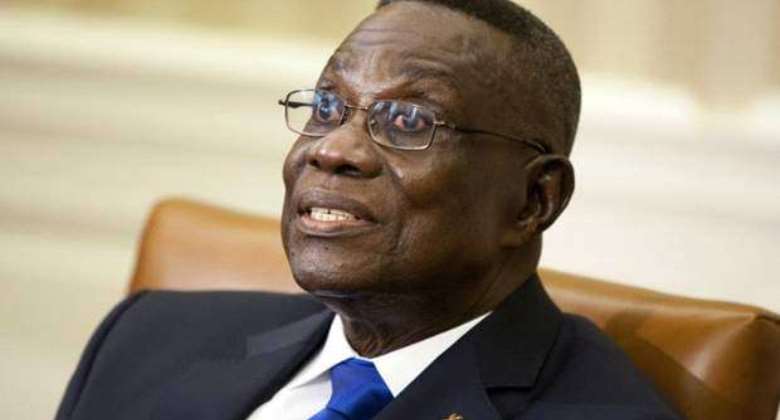 “And yet, Professor Mills was the 'Asomdwoe Hene’ of Ghana politics. His resting place itself is the ‘Asomdwoe Park!’ What irony!”

If the Professor should look down from the roof-top of heaven and behold the tussle over his 10-year old carcass by his former friends and foes, he would most certainly wonder in woe and paint the divine palaces of heaven with buckets of tears, pitiful sorrow and wailing.

The confusion over the resting place of his corpse should still provoke more despair and unhappiness in Sheol, should the Professor find himself there against the odds. How the corpse of a good man became the subject of such inglorious disputation by his best friends should warn us all about the vicissitudes of political fortune.

And yet, Professor Mills was the 'Asomdwoe Hene" of Ghana politics. His resting place itself is the "Asomdwoe Park!" What irony!

You remember how his demise 10 years ago unified this country in mourning like never before, making us look like a nation with one common destiny? Songs of our common heritage, composed in his eulogy, saturated the political space. Party colors immediately disappeared in his death, giving us all a sense of national brotherhood and filial affinity.

He was like a lamb whose death united our political differences. Of course, questions remain unanswered about the circumstances that led to his death. His famous athleticism on the runway at the Kotoka International Airport that fateful evening remains a political slur and a gross miscalculation in my mind.

But for that miscalculation, l am profusely convinced we can blame his managers for the crime and extricate the Professor. To make a very sick man run even half a meter for political rationalization is offensive to moderate sensibilities.

Now about the plethora of voices seeking to undercut the actions of Mr. Koku Anyidoho in the 10th anniversary disturbance. Nobody questioned Koku's loyalty to Professor Mills in his lifetime. I met Koku in New York in 2010 or thereabouts. He had followed the Professor to the United Nations and was trekking towards the building when l bumped into him.

That Koku has been loyal to his former boss is not in dispute. Professor Mills was a miniature Christ to him and so he followed him everywhere. He stood by his master in the trenches and battlefields of Ghanaian politics. Indeed, he could have followed his master to the grave if it were possible.

The Atta-Mills Institute he initiated is a legitimate entity known to the NDC and the Mills household. Indeed, many members of the party have been associated with the Institute in the past. If General Mosquito and Co. had issues with the Institute, why didn't they say so then?

Is the Institute illegitimate now because the NPP supported the renovation of the Asomdwoe Park? And what is suspicious about government using taxpayer's money to rehabilitate the Asomdwoe Park in honor of the former president and whoever might land there tomorrow?

The argument that Koku is politicking and self-aggrandizing with the late Professor's body is flawed. If Mr. Cadman Mills and General Mosquito have such evidence, why aren't they sharing it with the public?

The Mosquitoe's buzzing bites against Koku is misplaced. Koku's yeoman effort at working hard to beautify the Asomdwoe Park is honorable whether he did so as a party fateful or a party reject. However, not involving the Mills family in the reconstruction is an error of judgement, not necessarily a mischievous crime. The government could have engaged the Mills family on that score if it was so minded.

And one last point. Harruna suggested he had never seen the Prof. in a brown dress! This was in reference to the color of the Professor's reconstructed bust, l suppose.

Can someone do me the honor of asking the Honorable Minority Leader how he became the Chief Examiner and Certifyer of presidential apparels and wardrobes for their texture and color?