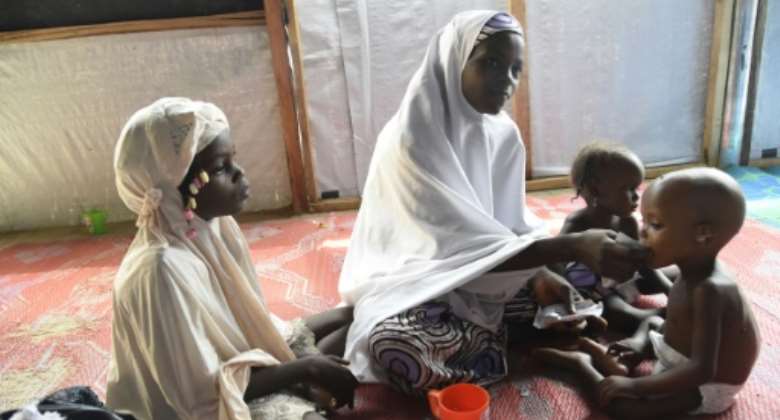 Malnutrition is surging among children in northwest Nigeria, fuelled by gang attacks that have disrupted agriculture. By PIUS UTOMI EKPEI (AFP)

Lariya Abdulkareem's family used to make a living farming beans and sorghum at a village in Nigeria's northwest Katsina state.

But threats of bandit attacks forced them to abandon their land and farm elsewhere.

Today, worsening insecurity has disrupted agriculture and food supplies in the region, and the grandmother says feeding her family has become a challenge.

"We cannot access the places we did before," Abdulkareem said, clutching her seven-month-old granddaughter in a clinic set up a year ago by health authorities with Medecins Sans Frontieres (Doctors Without Borders, MSF).

Rural northwest Nigeria has been ravaged by gangs of bandit militias who raid villages, loot cattle and kidnap people, holding them for ransom in camps deep in the forests that carpet the region.

Hundreds of thousands of people have been displaced across the northwest and central regions, and thousands killed.

The impact rivals that of a 13-year jihadist conflict in the northeast of Nigeria which has claimed more than 40,000 lives.

But in the northwest, the gang crime has also combined with surging prices for food and fuel, breeding a crisis that inflicts hunger on youngsters who are already exposed to malaria and other diseases, say aid workers and health officials.

MSF, one of the few international agencies to be active in the northwest, said the complex crisis has fuelled a surge in severe acute malnutrition among youngsters.

In Katsina state alone, nearly 44,500 children have been admitted to nutrition programmes this year, and aid agency and local health authorities are preparing for this to rise to 100,000 by year's end.

Nafisa Sani, a senior Katsina health official, said the state is seeing "high" numbers of malnutrition even for a region that often struggles with children malnourishment.

The Kofar Sauri in-patient clinic in Katsina city was set up to treat 200 patients, but admits up to 350, with mothers often sharing beds in tented wards. Other health facilities see a daily flow of hundreds of mothers seeking help.

MSF's in-patient sites in Katsina will expand capacity to 500 beds next month to attend to growing need over recent weeks, but complicated cases rose 40 percent just over the last week.

Tented clinics have been set up to help the malnutrition crisis unfolding in Katsina. By PIUS UTOMI EKPEI (AFP)

Inside tents, children under five, some on drips in emergency care, are weighed, measured and diagnosed for malnutrition, often after falling sick with other illnesses, medical staff say.

"We have measles ongoing, there is a hunger gap and with banditry we have a lot of displaced. It takes a toll on children," said Dr Yakubu Abubakar, a paediatrician working at one MSF Katsina city clinic.

"And this is just one state."

More than half the children were malnourished. One in four was severely malnourished and in need of urgent medical care.

UNICEF says Nigeria ranks first in the continent and second in the world for child malnutrition. Around eight million children in the northwest are undernourished, the agency said.

Fear of attacks or violence from bandit militias based in nearby Rugu forests in Katsina's western areas near the Niger border has kept many families away from farming the land.

Just this year, around 20,000 people were displaced by violence or threats in three areas of Jibiya local government area, a local official and community leaders said.

"Parents are struggling to get what they need to eat, so the babies and children suffer."

A woman at an MSF malnutrition clinic feeds the child of her late sister. By PIUS UTOMI EKPEI (AFP)

But as with other parts of the continent, Russia's invasion of Ukraine has disrupted global wheat supplies and fuel prices have increased leading to rise in food costs.

Farmers outside working fields just outside Katsina city said the price of seeds for stables sorghum, millet and groundnut have doubled since the start of the year.

Wasila Abdullahi, a 24-year-old mother of three, said price hikes were taking a toll on her meagre income.

A measure of maize used to cost 400 naira ($1) but now is 550 naira, she said, as her daughter Khadija played at her feet. The two-year-old suffered malnutrition while recovering from measles.

"Sometimes we don't have enough to feed the family," Abdullahi said.