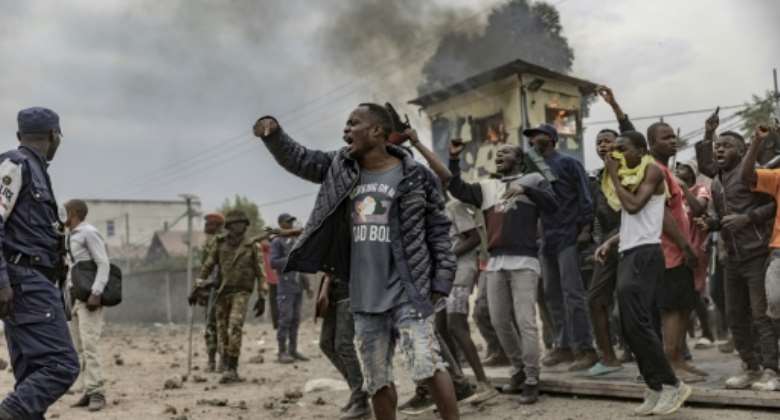 Soldiers and police officers were deployed across eastern DR Congo towns Wednesday after days of deadly anti-UN protests that have claimed at least 19 lives in the volatile region.

Calm appeared to have returned to several towns in North Kivu province, according to AFP reporters, after unrest broke out in the provincial capital Goma on Monday and quickly spread.

Crowds had stormed a United Nations peacekeeping base and a supply centre in the city of Goma in North Kivu on Monday, looting valuables and chanting hostile slogans.

Three UN peacekeepers were then killed on Tuesday after protests spread, in an attack on their base in the town of Butembo.

Government spokesman Patrick Muyaya said during a televised news conference on Tuesday night that 12 protesters in total had been killed during the unrest, in addition to the peacekeepers.

"In no case is violence justified," he said.

The UN mission in DRC, known as MONUSCO, has come under regular criticism in the troubled east, where many accuse it of failing to stop decades-old armed conflict.

Even as tensions began to dissipate in North Kivu on Wednesday, a deadly anti-UN protest erupted in the town of Uvira in neighbouring South Kivu province.

Four people were killed, according to Uvira town hall spokesman Dominique Kalonzo -- raising the total death toll from the anti-UN protests to 19.

Youngsters had attempted to besiege a MONUSCO base in the town on Wednesday morning, he said, before being dispersed by police officers firing warning shots.

A bullet pierced a high-voltage cable, however, which collapsed on protesters about 100 metres (yards) from the UN base, Kalonzo said, killing four.

On Wednesday, AFP correspondents saw tighter security in the North Kivu towns of Beni and Butembo, as well as in Goma, the provincial capital.

Armed police and soldiers were patrolling Beni in jeeps and a highway leading out of the town towards several MONUSCO bases was heavily guarded.

Relative calm had also returned to Goma, where shops were beginning to open again as security forces deployed across the city.

Most the fatalities have occurred in Goma and Butembo, key trading hubs in North Kivu province. By (AFP)

In the town of Sake about 30 kilometres (18 miles) from Goma, Congolese police fired tear gas to deter protesters from approaching a UN base, which was ringed with soldiers and police officers.

"We will protest until they leave," said Jackson Kibuya, a protester in Sake, holding up a banner reading "Bye Bye MONUSCO".

On Tuesday, MONUSCO released a statement strongly condemning the attacks on its peacekeepers, which it called unjustifiable.

Farhan Haq, a UN spokesman, also warned reporters in New York on Tuesday that the situation on the ground is "very volatile".

The latest protests come after the president of the senate, Modeste Bahati, told supporters in Goma on July 15 that MONUSCO should "pack its bags".

They also coincide with the resurgence of the M23 -- a militia that lay mostly dormant for years before resuming fighting last November.

MONUSCO is one of the UN's biggest peacekeeping operations, with more than 16,000 uniformed personnel. By John WESSELS (AFP/File)