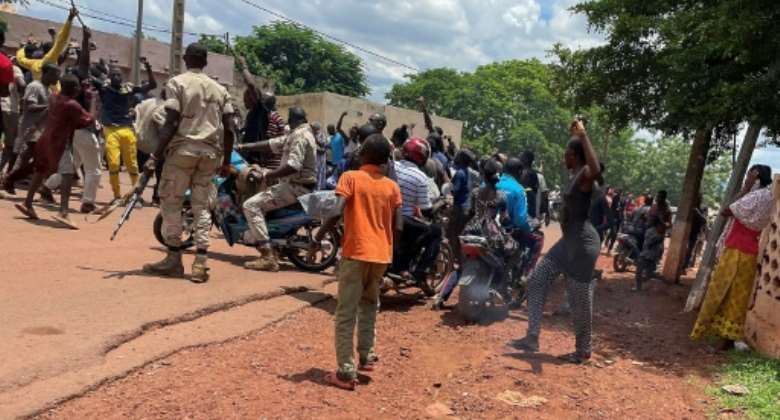 An angry crowd gathered at Kati after the attack, accusing a man (not pictured) of being one of the assailants. By - (AFP/File)

Al-Qaeda jihadists are tightening the screws on Mali's military junta, extending their attacks to the south of the country and hitting a key garrison town on the outskirts of the capital.

Raids last week displayed coordination and operational complexity at a range that is unprecedented in the country's decade-long jihadist campaign, say analysts.

Last Thursday, six attacks unfolded simultaneously at 5 am, striking the country's troubled centre as well as the southern regions of Sikasso, Koulikoro and Kayes, which until now had never been targeted.

The following day, two explosive-laden vehicles smashed into the gates of an army building in Kati, a garrison town 15 kilometres (nine miles) from Bamako, killing a soldier.

The suicide raid was claimed by the Support Group for Islam and Muslims (GSIM), the main jihadist alliance in the Sahel and an Al-Qaeda affiliate, according to monitoring group SITE.

The operation was "a way of telling (the authorities) that they can strike anywhere," a Malian analyst in the central town of Sevare told AFP.

The name of Kati has huge resonance in Mali. Its army base was the springboard for the country's August 2020 coup and reputedly houses the country's strongman, Colonel Assimi Goita, and Defence Minister Colonel Sadio Camara.

GSIM was created in 2017 from several groups -- Al-Qaida in the Islamic Maghreb, an early pioneer of jihadism in the Sahel that was born in 2007, and Katiba Macina, Ansar Dine and Al-Mourabitoun, which were also led by veteran militants.

A UN-based expert in jihadist groups said the GSIM's southward push emulated its successful "strategy of contagion" in the centre of the country.

Jihadists first struck the north of Mali in 2012, joining a regional insurgency.

After being scattered the following year by French forces, they regrouped, in 2015 launching attacks in the ethnically volatile centre and cross-border raids on Niger and Burkina Faso.

Across the three countries, thousands of civilians have been killed and more than two million have been displaced, and the economic damage has been devastating.

Heni Nsebia, a researcher at the Armed Conflict Location & Event Data Project (ACLED), said the recent attacks had had "modest results, bearing in mind the means that were deployed".

However, they were also a potent demonstration of the GSIM's powers of coordination, proving the organisation is not "just a coalition of disparate groups", he said.

One insight that emerges is the "major freedom of movement" for jihadists between the centre and south of the country, demonstrating the GSIM's influence over a vast area that includes the border with Burkina Faso, said Nsebia.

A recent report by UN specialists described a "southwards corridor" enabling GSIM to "extend towards the Atlantic coast" and countries on the Gulf of Guinea beyond Burkina Faso, notably Benin and Togo, where cross-border attacks have been rising.

GSIM's targeted tactics contrast with those adopted by Islamic State jihadists in Mali, who are often blamed for indiscriminate massacres of civilians.

In areas where it wields special clout, such as the arid regions of the north, the GSIM tries to set up a parallel government to the state, say local sources.

They try to win over local people to their vision of a just and protective society, "proposing Islamic justice, access to health care and security", said a security source in Timbuktu.

In early 2020, GSIM leader Iyad Ag Ghali declared he was willing to hold talks with the government in Bamako, as "between brothers", provided France and the UN withdrew their forces.

Mali has been run since August 2020 by a military-dominated government led by Colonel Assimi Goita. By ANNIE RISEMBERG (AFP/File)

Since then, Mali's elected government has been replaced by a military one, and French troops are close to pulling out after the junta brought in Russian paramilitaries.

But these major shifts have not been followed by any sign of talks. In fact, violence has risen.

In central Mali, civilians are caught between the jihadists on one side and, on the side, the Malian security forces aided by suspected operatives from the pro-Kremlin Wagner group.

In June at least 132 villagers were massacred -- an act that the authorities pinned on the GSIM's Macina Katiba component, but which the GSIM has denied.