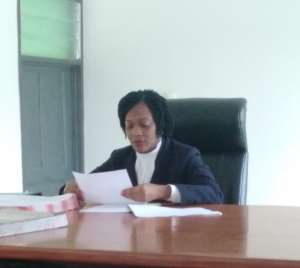 Alternative Dispute Resolution (ADR) was instituted in the year 2005 as an intervention to ease pressure on the regular Court system and to create a platform that would offer disputants the opportunity to play a key role in resolving their disputes.

To promote and entrench this intervention, a week in every legal year term is set aside to sensitize the general public.

In a speech read on behalf of Her Ladyship Justice Irene Charity Larbi, Justice of the Appeals Court and Judge in charge of ADR at a stakeholder engagement meeting at Daboase in the Western Region, the Wassa East District Magistrate Her Worship Henrietta Charway said Order 1, Rule 1(2) of the High Court (Civil Procedure) Rules, 2004 provides that, “these rules shall be interpreted and applied so as to achieve speedy and effective justice, avoid delays and unnecessary expenses, and ensure that as far as possible, all matters in dispute between parties may be completely, effectively and finally determined and the multiplicity of proceedings concerning any of such matters avoided.”

She added that Section 72 (1) of the Courts Act 1993 (Act 459) provides that “any Court with Civil Jurisdiction and its officers shall promote reconciliation, encourage and facilitate settlement of disputes in an amicable manner between and among persons over whom the Court has jurisdiction” adding that the High Court (Civil Procedure) Rules 2004 and the Courts Act 1993(Act 459), prescribe amicable resolution of cases before the Courts as the most innovative way by which justice can be done.

She stressed that access to justice can only be achieved when the adjudication process is expeditious, devoid of unnecessary expense and ensure that as far as possible, all matters in dispute between parties are completely, effectively and finally determined and the multiplicity of proceedings concerning such matters are avoided.

She noted that regular Court system being a right-based process, though has its own strengths, which is characterized by factors that occasion delays and cost, thereby making access to justice most of the time very difficult.

She intimated that the strength of the provisions in the Rules of Courts and the Courts Act, the Judicial Service has adopted ADR to ensure that access to justice is not hindered.

Touching on the benefit of ADR over conventional litigation, Her Worship Charway said disputants enjoy privacy, saying some people decide that rather than embarrassing themselves in Court, they would withhold valuable information. “People extremely value the privacy ADR provides. This is because when the matter is heard in the open, the media may pick it up and place it in the public domain. This makes the parties involved susceptible to all types of comments and sometimes public ridicule,” she noted.

According to Her Worship, ADR provides a healthier method for resolving disputes. Parties to conflicts which arise within an ongoing relationship such as families, neighbours, landlords and tenants, as well as business associates appreciate techniques which support the positive maintenance of these relationships and often find out that, the process itself teaches them new ways to deal with future conflict and new ways to communicate. In family, workplace and business disputes, she added that it is important to preserve future relationships and therefore a procedure which is not disruptive to the normal life of the relationship, is preferred over litigation.

She emphasised that ADR helps decongest the Courts, thus allowing Judges to have more time in handling cases which are not amenable to ADR. This undeniably she stated makes the Judiciary more efficient and offers financial and emotional relief to the parties. "Agreements reached at the end of the ADR process are sent to the Court for adoption as a consent judgment, thereby making the terms of settlement enforceable by the Court."

In attendance were Chiefs and Queen Mothers, the Police, CHRAJ, Social Welfare, Information Services, GPRTU and the general public.

Participants urge the Judicial Service to embark on a sensitisation drive to educate more people about ADR.