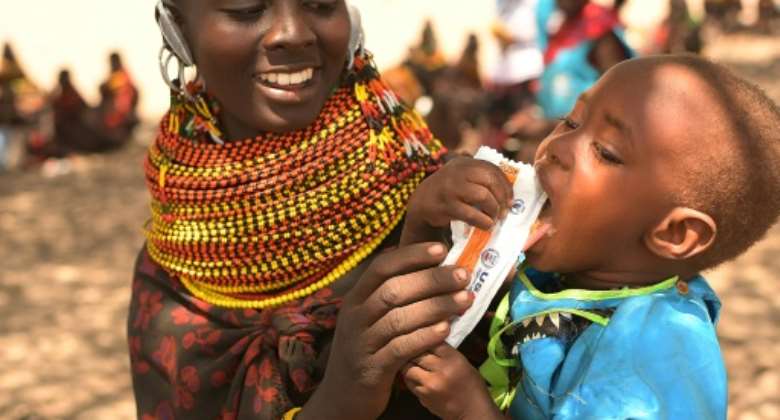 Under an acacia tree in Kenya's drought-ravaged north, malnourished infants feed on sticky mouthfuls of a nutrient-dense peanut paste long used to prevent child starvation in disasters across the globe.

This wonder food can mean the difference between life and death for a child in hard-hit Marsabit, where aid workers say young children are perishing in conditions that border on famine.

"If we ran out of these, more deaths would be recorded very soon," James Jarso of aid group World Vision said of the sachets being distributed by charity workers in the parched and isolated village of Purapul.

But just as 1.7 million children face starvation in the drought-stricken Horn of Africa, the cost of these life-saving supplements is skyrocketing because of another crisis unfolding thousands of miles away.

The conflict in Ukraine is making ready-to-use therapeutic food (RUTF) more expensive to manufacture and procure, says UNICEF, which buys almost 80 percent of the world's supply.

Ukraine is a major exporter of sunflower oil, wheat and other grains. The war has affected the price and availability of staple foods, driven up fuel prices, and disrupted supply chains already off-kilter because of the pandemic.

World Vision says RUTF is 'life-saving' in places like the Kenyan village of Purapul. By Simon MAINA (AFP/File)

A knock-on effect has been higher prices for powdered milk, vegetable oils and peanuts -- all key ingredients in RUTF, said Christiane Rudert, a nutrition adviser for UNICEF for southern and eastern Africa.

Even the materials used to make RUTF packaging have become scarcer and costlier, she said.

UNICEF, which purchases around 49,000 tonnes of RUTF every year, is starting to feel the pinch.

"The cost has definitely gone up already, which affects our orders," Rudert told AFP.

French company Nutriset told AFP it raised the cost of its leading RUTF product "Plumpy'Nut" twice in the past year, including a 13-percent hike in May.

About 1.7 million children in Kenya, Somalia and Ethiopia are suffering the most severe form of malnutrition. By Simon MAINA (AFP)

It could not attribute this directly to Ukraine but a confluence of factors, including the war but also the pandemic, higher shipping costs, and environmental disasters, Nutriset said in a statement.

UNICEF forecasts that by November, prices for RUTF will have risen 16 percent from pre-war levels.

Russia's invasion has also raised fuel prices, making it costlier to deliver RUTF to where it's needed.

The timing could not be worse.

More than 1.7 million children in Kenya, Ethiopia and Somalia are suffering the most lethal form of malnutrition as the Horn of Africa experiences its worst drought in generations.

The rising cost of RUTF means treating those children "will cost $12 million more than it would have cost before Ukraine", Rudert said.

A sachet of RUTF contains 500 calories and essential vitamins and minerals. By Simon MAINA (AFP)

It is money that is sorely lacking, she said, with donations to address the hunger crisis in the Horn falling well short of need.

"This product... is literally what saves children's lives when they have already reached that really severe form of malnutrition.

"It's not just peanuts and milk and sugar and oil... it's therapeutic," Rudert said.

Invented a quarter of a century ago, RUTF proved revolutionary in treating severe wasting, a deadly condition where underfed children are too thin for their height.

A single sachet of RUTF delivers 500 calories and essential vitamins and minerals.

RUTF does not require refrigeration and can be eaten from the packet without preparation or assistance from a healthcare professional. By Simon MAINA (AFP)

Eaten directly from the packet, RUTF helps malnourished children quickly regain weight and energy, and requires no refrigeration or preparation by a healthcare worker.

This is essential in remote and impoverished regions like northern Kenya, where clean water and health workers are in short supply.

On a twice-monthly visit to Purapul, government doctor Mohamed Amin said most women and children were surviving on little else than the packs of paste he prescribed.

"It has really been a challenge," he told AFP at a mobile health clinic, where mothers were handed two weeks' worth of supplements to feed their children between screenings.

"At least it boosts them."

UNICEF buys enough RUTF to feed at least 3.5 million children a year. But at current funding levels, a 16-percent price rise could mean 600,000 miss out on this life-saving treatment, Rudert said.

This would have disastrous consequences not just for the Horn but elsewhere in Africa such as South Sudan, where 300,000 children are expected to require RUTF treatment this year.

UNICEF forecasts a 16-percent increase in the cost of RUTF by November. By Simon MAINA (AFP)

Jarso, from World Vision, said the impact of RUTF in a place like Purapul could not be overstated.