Tunisia set for new constitution after vote with low turnout 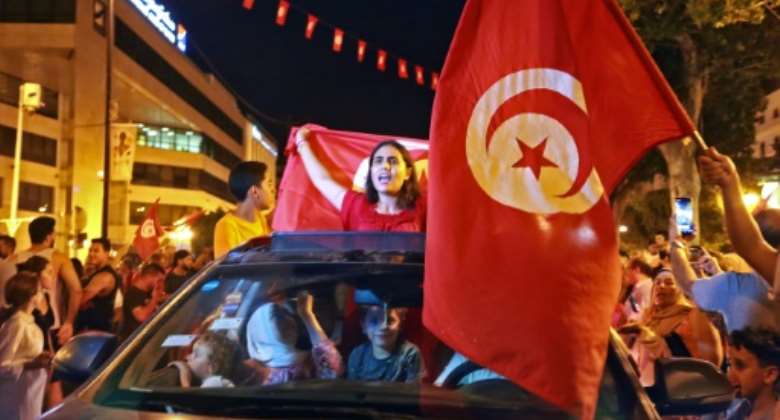 Supporters of Tunisia's President Kais Saied rejoice on Habib Bourguiba Avenue in the capital Tunis after the projected outcome of a constitutional referendum was announced. By Anis MILI (AFP)

Tunisia was set Tuesday to approve a new constitution granting unchecked powers to the office of President Kais Saied, after a poorly attended referendum in which voters overwhelmingly backed the document.

Saied's rivals accused the electoral board controlled by Saied of "fraud" and said his referendum, held Monday, had failed.

On Tuesday evening, the head of the ISIE electoral commission said 94.6 percent of valid ballots had said "yes" to the new constitution with 30.5 percent turnout, citing preliminary results.

Map of Tunisia. By (AFP)

Monday's vote came a year to the day after the president sacked the government and suspended parliament in a dramatic blow to the only democracy to have emerged from the 2011 Arab Spring uprisings.

For some Tunisians, his moves sparked fears of a return to autocracy, but they were welcomed by others, fed up with high inflation and unemployment, political corruption and a system they felt had brought few improvements.

There had been little doubt the "yes" campaign would prevail, a forecast reflected in the exit poll.

Most of Saied's rivals called for a boycott, and while turnout was low, it was higher than the single figures many had expected.

President Kais Saied raises a fist in celebration with his supporters. By - (Tunisian Presidency/AFP)

"What the Tunisian people did... is a lesson to the world, and a lesson to history on a scale that the lessons of history are measured on," he said.

But the US State Department said on Tuesday that it noted "concerns that the new constitution includes weakened checks and balances that could compromise the protection of human rights and fundamental freedoms".

Tunisian electoral officials tally votes in the capital Tunis, the day after a referendum that is set to give the president unchecked powers. By FETHI BELAID (AFP)

Saied, a 64-year-old law professor, dissolved parliament and seized control of the judiciary and the electoral commission on July 25 last year.

His opponents say the moves aimed to install an autocracy more than a decade after the fall of dictator Zine El Abidine Ben Ali, but his supporters say they were necessary after years of corruption and political turmoil.

"After 10 years of disappointment and total failure in the management of state and the economy, the Tunisian people wanted to get rid of the old and take a new step -- whatever the results are," said Noureddine al-Rezgui, a bailiff.

A soldier loads a truck with ballot boxes to be transported to a counting centre in the capital Tunis. By FETHI BELAID (AFP)

Rights groups have warned the draft gives vast, unchecked powers to the presidency, allows Saied to appoint a government without parliamentary approval and makes him virtually impossible to remove from office.

Said Benarbia, regional director of the International Commission of Jurists, told AFP the new constitution would "give the president almost all powers and dismantle any check on his rule".

"The process was opaque and illegal, the outcome is illegitimate," he added.

Saied has repeatedly threatened his enemies in recent months, issuing video diatribes against unnamed foes he describes as "germs", "snakes" and "traitors".

A Tunisian man votes at a polling station in Kasserine. By HATEM SALHI (AFP)

On Monday, he promised to hold to account "all those who have committed crimes against the country".

Analyst Abdellatif Hannachi said the results meant Saied "can now do whatever he wants without taking anyone else into account".

"The question now is: what is the future of opposition parties and organisations?"

As well as remaking the political system, Monday's vote was seen as a gauge of Saied's personal popularity, almost three years since the political outsider won by a landslide in Tunisia's first democratic direct presidential election.

The country is now set to hold elections to the neutered parliament in December.

Until then, "Kais Saied will have more powers than a pharaoh, a Middle Ages Caliph or the (Ottoman-era) Bey of Tunis," said political scientist Hamadi Redissi.

Participation in elections has gradually declined since the 2011 revolution, from just over half in a parliamentary poll months after Ben Ali's ouster to 32 percent in 2019.