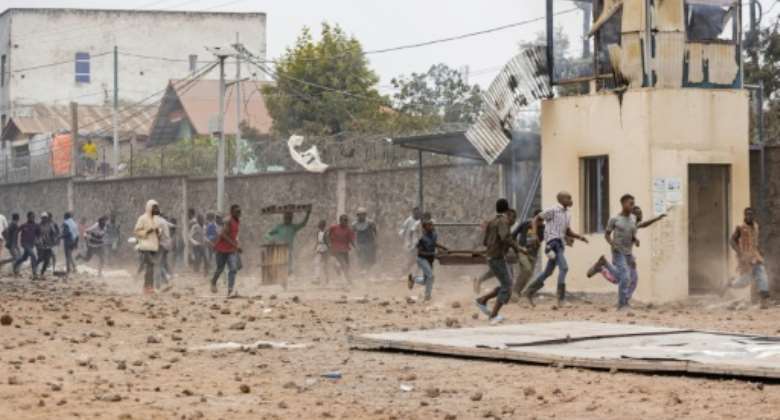 Protesters attacked the UN base in Goma on Tuesday for the second day running. By Michael Lunanga (AFP)

Three United Nations peacekeepers and at least 12 demonstrators have been killed in escalating anti-UN protests in eastern DR Congo, officials said on Tuesday.

Anger has been fuelled by perceptions that MONUSCO, the UN mission in the Democratic Republic of Congo, is failing to do enough to stop attacks by armed groups.

Crowds on Monday stormed a MONUSCO headquarters and supply base in Goma, the chief city in North Kivu province, and the protests spread on Tuesday to Beni and Butembo to the north.

Butembo police chief Colonel Paul Ngoma said three peacekeepers there -- two Indians and a Moroccan -- had been killed and another injured, while seven demonstrators had died and several others were wounded.

Earlier, government spokesman Patrick Muyaya said on Twitter that "at least five people (were) dead, about 50 wounded" in Goma.

The security forces had fired "warning shots" at protesters to stop attacks on UN personnel, he said.

MONUSCO is one of the world's biggest peacekeeping operations.

But it has regularly come under criticism in the troubled east, where many accuse it of failing to do enough to end decades-long bloodshed.

In Monday's unrest, hundreds of people in Goma blocked roads and chanted hostile slogans before storming MONUSCO's headquarters and a supply base there.

Protesters smashed windows and looted valuables, while helicopters airlifted UN staff from the premises and security forces fired teargas in a bid to push them back.

An injured man was taken away by motorbike outside the UN supplies base in Goma on Monday. By Michel Lunanga (AFP)

The unrest in Goma continued on Tuesday, with the fatal shooting of a man near the supplies base, an AFP correspondent saw.

Congolese security forces held back a crowd outside the facility, some of whom carried placards such as "Bye-bye, MONUSCO."

At Goma's CBCA Ndosho Hospital, the head of administration, Serge Kilumbiro, told AFP that 28 people had been admitted with gunshot wounds on Monday and eight more on Tuesday.

In Beni, about 350 kilometres (215 miles) to the north, soldiers deployed on the road leading to the MONUSCO base there on Tuesday, while protesters burned tyres. Shops, markets and petrol stations were closed.

In the town of Butembo, security forces dispersed protesters who had gathered in front of a MONUSCO base, witnesses said.

Ngoma, the local police chief, said some youths were "armed".

The latest protests come after the president of the senate, Modeste Bahati, told supporters in Goma on July 15 that MONUSCO should "pack its bags".

They coincide with the resurgence of the M23 -- a militia that lay mostly dormant for years before resuming fighting last November.

MONUSCO on Monday said it "vigorously condemned the attack" on its premises in Goma, "carried out by a group of looters on the sidelines of a demonstration which, in addition, was banned by the mayor of Goma".

In a statement on Monday, Khassim Diagne, the deputy special representative of the UN secretary general to MONUSCO, said the peacekeepers were there to protect civilians.

"The incidents in Goma are not only unacceptable but totally counterproductive," he said.