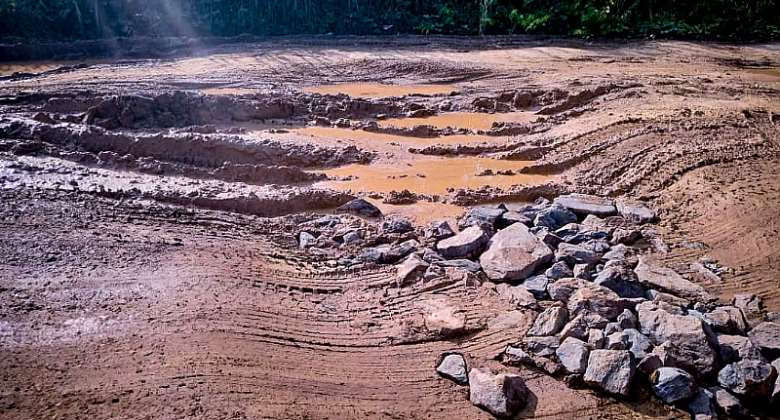 The deplorable state of the road network linking Bogoso and Prestea in the Prestea Huni-Valley Municipality of the Western Region has forced commercial drivers plying that stretch to embark on a sit-down demonstration Thursday, July 21, 2022.

Commuters, including traders and other formal sector workers, were stranded in the early hours of Thursday at the various lorry terminals as a result of the demonstration.

The drivers’ action comes after many complaints to authorities about the state of the road which has continuously had a toll on their pockets were not addressed.

The 20-kilometre road linking the two vibrant mining communities, Bogoso and Prestea, has become a death trap for years.

Drivers who spoke to this reporter said the negative impact of the road network is gradually rendering them poorer.

“We are unable to save. The monies we get from our services now go into fixing our cars since they breakdown frequently because of the bad road we use,” they said.

The disturbed commercial drivers further noted that there have been several attempts to embark on such demonstration, but for a second thought about the social and economic activities in the municipality, they rescinded.

They stated, “Bogoso and Prestea host one of the major market days in the Western and Western North Regions which run for days with the major one on Saturday in Bogoso.”

According to them, farmers in the Municipality need good roads to also convey their farm produce to the market.

They claim government has neglected them and they could not continue to spend so much on spare parts to fix their vehicles every week.

Efforts to construct the road can be traced back to 2016.

However, six years down the lane, the stretch which is part of cocoa roads has become deplorable, with sharp and gaping potholes.

The recent rains have even worsened the already tattered road and there is no work currently ongoing on the road.

Possible Agencies Limited, Asabea Engineering Limited, Yakab Prestige Limited and Boadac Company Limited who were awarded the project after a review of cocoa roads contracts are not on site.

In July 2021, the Minister of Roads and Highways, Hon. Kwasi Amoako-Attah stated in Parliament that parts of the Bogoso-Prestea road has been constructed.

He was emphatic that “between five and kilometre 10 has been substantially completed but left with road signs and land markings.

He further stated, “this is a bituminous road and once the road furniture is ready, putting the map and doing the road markings, normally should not take more than two weeks”.

That was in response to a question by Member of Parliament for Prestea Huni-Valley Constituency Hon. Robert Wisdom Cudjoe.

In a recent interview with the Divisional Chief of Himan Nana Nteboa Pra IV at his place, he complained about the same road which basically is the only route for farmers from Bogoso and Prestea and its environs.

He pleaded with the central government to come to the aid of the twin mining towns by constructing the road for the people of Prestea Huni–Valley Municipality to have a dignified life.