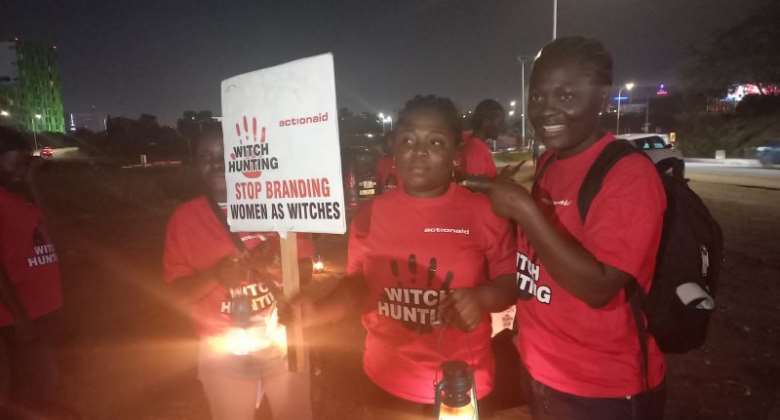 ActionAid Ghana, a Non-Governmental Organisation (NGO), has called on Parliament to fast-track the passage of the Private Member's Bill to criminalise witch hunting.

Madam Margaret Brew-Ward, a Women's Rights Advocacy and Campaign Manager, ActionAid Ghana, said despite the protection the constitution granted to all persons, hundreds of women were accused of witchcraft and condemned to a life of extreme violence and isolation.

The Private Members' Bill sponsored by three Members of Parliament is in furtherance of an earlier effort by the 7th Parliament to introduce this law, pursuant to a petition by the Sanneh Institute dated August 4, 2021.

On 23 July 2020, Madam Akua Denteh, a 90-year-old woman was beaten to death in broad daylight at Kafaba, near Salaga, which was condemned by the public.

Madam Brew-Ward said since that condemnable incident, many other women continued to face various levels of abuse in silence, hence, the act must as a matter of urgency and extreme priority be made unattractive by criminalising and prosecuting perpetrators of such human rights abuses and allowing women to ''age in peace and not in pieces.''

She bemoaned the silence on the “wanton and shameless” atrocities perpetrated toward women who were already vulnerable and living in poverty.

''Witchcraft accusation is not a tradition! Article 26 (2) of the 1992 constitution states that 'all customary practices, which dehumanise or are injurious to the physical and mental well-being of a person, are prohibited. The question then is, why we are not getting the needed national attention on this practice?'' She asked.

The Women's Rights Advocacy and Campaign Manager said: “These incidents are truly unacceptable and constitute a blot on our credentials as a country that is governed by rule of law. This is not just a shame it is an egregious practise that must be stopped once and for all.”

Those women, Madam Brew-Ward said, were banished from their homes and forced to live in ''witch camps'' whose continued existence in the 21st century alone was a cruel manifestation of gender inequality and violence against women in the country.

''Witch camps are effectively women's prisons where inmates have been given no trial, have no right of appeal but have received a life sentence. ActionAid and all Civil Society Organisations believe the time is NOW to take actions to address the root causes of these human rights violations,'' she said.

Madam Brew-Ward called on Government to muster the political will to curb the menace as citizens could not continue to turn a blind eye and engage in talk shops without taking bold action.

She assured the public of the commitment of their partners to continue to fight to ensure the elimination of the practice while urging all well-meaning citizens to join in the fight to restore women's dignity and fully restore the country's credentials as law-abiding, human rights-respecting and truly governed one in practice by the rule of law.

Ms Mateenah Odoi, Board Member of Young Urban Women's Movement, a subsidiary of ActionAid Ghana, said it was inhumane to lynch old women.

'' In times like this you wonder if it is good to be a woman or not because old age is inevitable, and I am scared that when I'm 90 years old I'll be called a witch because my son or daughter is not progressing in life,'' she said.

ActionAid is a global federation with the aim to achieve social justice, gender equality and poverty reduction.

ActionAid in Ghana supports the basic needs and rights of the poor, with an emphasis on human rights, land rights and the right to education.

My loyalty towards NPP remained intact despite being sidelin...
21 minutes ago