The Harmless Ghost Of Prof. Mills Is Haunting The Defiant Koku Anyidoho 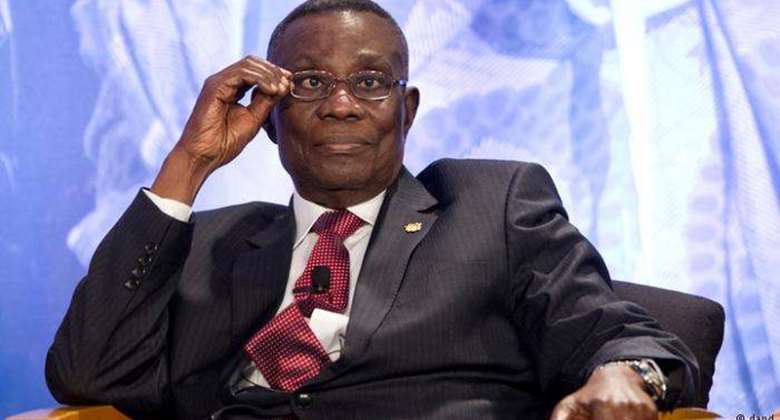 In Gonja parlance, we say that when a fool carries a corpse, you would but suspect that he’s the killer. It is now becoming evident that Koku Anyidoho knows something about the death of Prof Mills which the late Prof’s family are not privy to. Isn’t it curious that Koku seem to always suggest that President Mills didn’t die his natural death, and that someone might have strangled him to death?  May the gentle soul of Prof Evans Attah Mills rest in eternal peace.

Today, 24th July, 2022 marks the 10 Anniversary of the passing of the most peaceful and ever selfless President Ghana has ever had at least for this 4th Republic. Three and half years in office, but he still remains in our hearts as one of the best President Ghana had.

Indeed, the coming of H.E John Dramani Mahama to partner the late Prof Mills in 2008 was the biggest thing that happened to the NDC in 2008. In fact, Prof Mills during his time as President never hid his admiration for President Mahama. He has on a number of occasions addressed H.E John Mahama as his Vice in whom he was pleased. The two were actually admired not only because their pair was lovely one but a pair that gave Ghana huge infrastructure development that the 4th Republic has experience.

During his days as President, Prof Mills never made a comment or assume a posture that suggested that he had an issue with John Mahama. The respect that a subordinate is supposed to accord the superior with was always seen in John Mahama’s work. God in his wisdom decided to call Prof Mills earlier than we all could imagine, and all of a sudden, the harmless John Mahama ia tagged as one that hated Mills and one who would have wished him dead. Isn’t this disposition surprising?

Today, the NPP under the leadership of Nana Addo wants to create an impression that they love the late Prof more than John Mahama, the NDC and even Prof’s family. Once there is a political cow to milk, they are running on themselves trying to paint John Mahama and the NDC as some sort of haters of Prof Mills. Meanwhile in opposition, Nana Addo and his NPP made fun of the illness of the humble Prof to the extent they declared and wished him dead anytime the old Prof went to seek medical attention.

Prof Mills at a point had to publicly admit he was sick of sinus infection. This was public information. When his illness deteriorated, it wasn’t hidden. And even his family had, on a number of occasions admitted that he died out of that sickness.

Unfortunately, the heartless and insensitive NPP people including Nana Addo, since 2012 have been trying to hoist the death of Mills on President Mahama. In the run up to the 2012 elections, they started that agenda with their rented press, especially their Twi stations, who always gave targeted commentary to suggest that Prof Mills was killed by somebody. In fact, I remember I listened to one Twi station in Kumasi in 2012 where the host insinuated that President Mahama might have killed Prof Mills so that he can take over as President. This has been the handiwork of the NPP and their surrogates within. Ten years on and the NPP are still running around with such posturing and subtly pushing the narrative of Mills’ death to imply he was murdered.

Ironically, we have just discovered that it was Koku Anyidoho all these while who has being partnering the NPP to create such unfortunate narratives just to tarnish the image of President Mahama. Koku Anyidoho became jealous of some of the young people President Mahama appointed to aide him at rhe Presidency including Stan Dogbe. His jealousy actually graduated into this unexplained hatred for John Mahama to the extent that Koku has sacrificed basic principles of life to pull John Mahama down with the least opportunity.

Koku Anyidoho as the Communication Director for Prof Mills was noted for his arrogance and abuse of power even within his colleagues at the Presidency at the time. Koku could announce the dismissal of the ECG boss in the Ashanti Region even without a formal letter and knowledge of President Mills. Koku fought Hon Mahama Ayariga to a point he latter was relieved of his post as the Spokesperson for Prof Mills.

I said this and will say it again—if indeed Prof Mills didn’t die his natural death and that he was actually killed by someone closer then, the prime suspect should be Koku Anyidoho. On that 24th July, 2012, according to available information which President Mahama himself had alluded to, indicated that he, President Mahama was on assignment out of the Osu Castle. This implies that President Mahama wasn’t at the castle at the time President Mills passed. The late Prof immediate family were around and in fact, Koku was around. So, if there is anybody to suspect for the murder of Prof Mills, if that is what Koku and his NPP cannibals want us to believe then, all fingers should be pointing at Koku, because he was right there when President Mills passed.

Yes, John Mahama is a pure Gonja. A royal partly and a warrior partly. If there is anything President Mahama can do, it is not to think evil how much more executing one. Looking at the faces and attitudes of President Mahama and Koku Anyidoho, who looks like a vampire, a monster and a potential killer? Koku is left without shame and conscience once his food is served. He eats and smokes small and the next thing is to get data to spew thrash on President.

Some of us have decided not to give Koku any audience in the past but because his madness has become a convenient political tool for the NPP and President Nana Addo to exploit then, it’s about time we told Koku that he has a hand in Mills’ death, if indeed he was killed as purported.

We all know that Hon Nii Lante, Hon Mahama Ayariga, comrade Ludwig, Dr Tony Aidoo and others, equally worked closely with Prof Mills. Although the names mentioned above are by far respected individuals as compared to Koku, but one would have thought that at least, one of them would for once agree with Koku’s witchcraft, but all of them seem not to know and agree with Koku’s escapades.

Sadly, because the NPP government don’t care about nothing once their political interest is served, they’ve decided to even leave out the family of the late Prof Mills and to give Koku all the attention and money he needs to keep attacking John Mahama by using Mills’ name. A government that has run Ghana’s economy down should be thinking of how to fix it and not to use the death of President Mills to exploit the unsuspecting Ghanaians.

When his 8-year old daughter, Sitsofe, died in a car accident, Mr Koku didn’t honor her with any seriousness. I am even told he has  left the wife traumatized after the death of her daughter. That is a person who wants the world to believe that he genuinely loves the late Prof Mills more than his family.

I shudder to think that Koku is probably being haunted by the ghost of Prof Mills which is why he can even go to the extent of fighting Prof’s biological brother and the entire family. By the time we open our eyes, I can predict that Koku will run naked before he dies. Today, Koku wants us to applaud President Nana Addo for renovating the Asomdwe park and ignore all his derogatory comments including wishing the Prof dead. Today, celebrating the dead is worth more than respecting the old Prof when he was alive. Who named President Mills Proffessor do little?

You are asking for the autopsy report of Prof Mills while running away from conducting same on your daughter. Can we also call for autopsy to be done on the late wife of Nana Addo? Can we also conduct autopsy on the late Kobina Boadu, the former aide to Dr Bawumia? What about the late Baah Wiredu? What about President Rawlings? I even heard Koku was as usual around President Rawlings at the time of his passing.

I am not God, but I can tell a ripe corn by it’s look. Mr Koku Anyidoho if given the next 50 years with all the opportunities in this world, he can never achieve a half of what President John Mahama has achieved. Insha Allah! Insha Allah! Insha Allah! JOHN DRAMANI MAHAMA WILL BE THE NEXT PRESIDENT OF GHANA come 2025, even if Koku should exhume the body of Prof Mills and bury it again.

Finally, let the notice be served on Koku Anyidoho that henceforth, I will follow him to any gutter he goes with the name John Mahama. We won’t sit down for such an aimless character to tarnish the image of John Mahama and get away with it. Let the late Prof rest in his grave for once. Maybe weed smoking should be legalized in Ghana.

Let NDC have peace; you even suspended your elected chairman...
1 hour ago

You got this wrong – Annoh-Dompreh chides Ato Forson for con...
2 hours ago