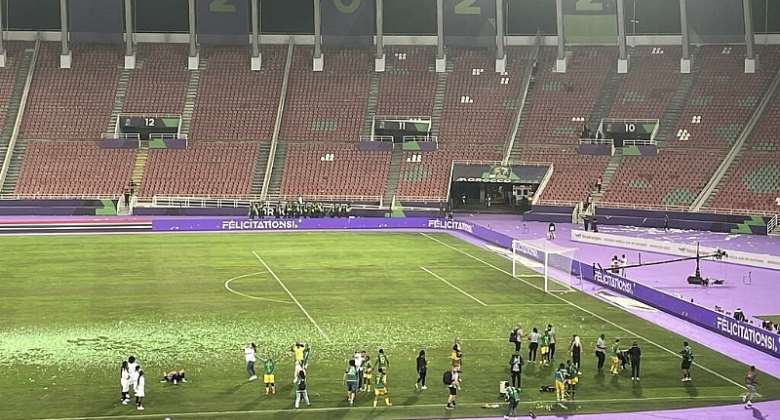 It was sixth time lucky on Saturday night as Hildah Magaia struck twice to give South Africa a 2-1 victory over Morocco and their first women's Cup of Nations trophy.

South Africa made the breakthrough just after the hour mark on a slick counter.

Bambanani Mbane sent Jermaine Seoposenwe free down the left and she raced goalwards and cut back to Magaia who flicked in confidently to the right of the Morocco goalkeeper Khadija Er-Rmichi.

Magaia doubled the score soon after with a sumptuous team goal involving 10 players which switched play from the right via goalkeeper Andile Dlamini to the left.

Magaia stabbed home after Er-Rmichi failed to gather Karabo Dhlamini's low drive from the left into the box.

The second blow silenced the capacity crowd at the Prince Moulay Abdallah Stadium in Rabat.

Choice
But the South Africans opted for conservation. Knocking the ball round seemed a dangerous choice for a side that can embrace panic as rapidly as it can ooze slickness.

And the policy backfired spectacularly as the defence was carved open and Rosella Ayane scored her first goal of the tournament to give her country hope and raise the fervour of the crowd.

Desiree Ellis's side panicked when nursing a one goal lead against Tunisia in the quarter-final.

That time they did not have a partisan crowd against them.

And they failed to learn from the lesson. No one kept a foot on the ball and they descended into agricultural defending.

Fortunately for the South Africans, as they thrashed upfield, Morocco, with the seconds ticking away to the final whistle, launched down wind.

It was frantic, furious and fun for the neutral. Far removed from the poised polish of the early stages with both teams trying their best to keep possession and build patiently.

Back then it meant a midfield chess match with space at a premium.

But that was when the night was young.