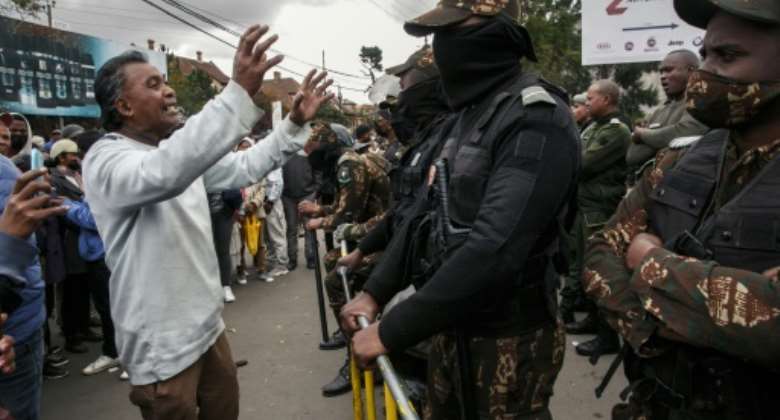 Several hundred anti-government demonstrators gathered in the centre of Antananarivo. By RIJASOLO (AFP)

Police in Madagascar detained two leading members of the main opposition party on Saturday during a protest in the capital against rising living costs and economic hardship.

Several hundred anti-government demonstrators gathered in the centre of Antananarivo in the morning, watched by a heavy military and police presence.

Police said they arrested Rina Randriamasinoro, the secretary general of the opposition Tiako I Madagasikara (TIM) party, and its national coordinator Jean-Claude Rakotonirina following tensions between demonstrators and security forces. The pair were later released.

"They were arrested and placed in police custody because they made comments inciting hatred and public unrest," Antananarivo's prefect Angelo Ravelonarivo told AFP.

Inflation has soared to the highest level in decades in many countries, fuelled by the war in Ukraine and the easing of Covid restrictions.

Organisers had wanted to hold the rally inside a warehouse belonging to opposition leader Marc Ravalomanana, but demonstrators arrived to find security forces blocking access to the venue.

Protesters then staged a sit-in outside the building.

Footage shared on social media showed police pulling Randriamasinoro and Rakotonirina from the crowd before taking them away in a police pick-up.

"The rally was authorised yesterday by the prefect and then this morning we discovered the police outside the gate," said opposition lawmaker Fetra Ralambozafimbololona.

The arrests sparked further remonstrations, with demonstrators vowing not to leave the area until the two men were released -- before eventually dispersing in the afternoon.

Randriamasinoro and Rakotonirina were eventually let go early in the evening, a police spokesman said, adding authorities were yet to decide whether to press charges against them.

'We can't say anything'

Protests are rare in the country with the opposition and rights groups accusing the government of President Andry Rajoelina of stifling dissent and rarely allowing demonstrations.

"We came to demonstrate against the high cost of living."

Ravelonarivo, the prefect, said that while the demonstration had not been banned, he had suggested it be held at a different location away from the city centre.

One of the poorest nations in the world, Madagascar is still reeling from the economic effects of the coronavirus pandemic and a series of extreme weather events.

Tropical storms and cyclones have battered the country this year, killing more than 200 people, adding to the damage of a severe drought that has ravaged the island's south leading to malnutrition and instances of famine.

Rajoelina, 48, first came to power in 2009, ousting Ravalomanana with the backing of the military.

He returned to the presidency in 2019, after beating his predecessor in an election beset by allegations of fraud.