Scientists in Morocco use fake nests to entice flamingos to breed 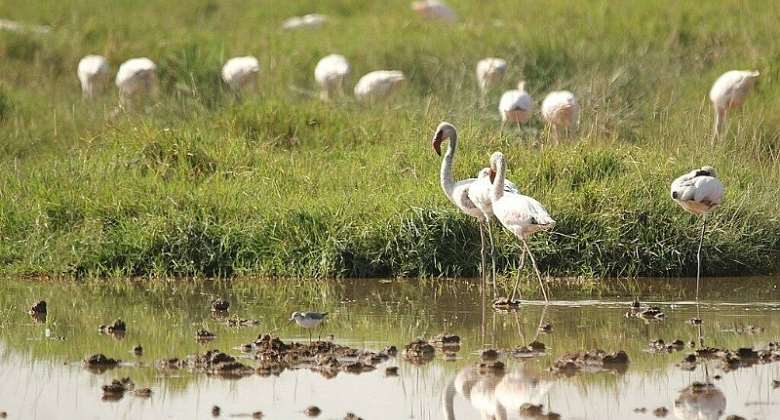 Scientists in Morocco have set up artificial nests as part of a strategy to tempt greater flamingos to breed in the North African country for the first time in more than 50 years.

The distinctive long-legged birds obliged, in what's being seen as a sign of hope for a species threatened by habitat loss around the globe.

But quite how significant a part the fake nests played in this breeding success story is now under debate.

Greater flamingos are the largest species of flamingo. Although these wetland-nesting birds are found in their thousands across 40 sites in Morocco, until now the last time breeding pairs were recorded in the country was between 1957-1968.

Those birds nested at Lake Iriki in south-eastern Morocco -- but then a dam was built on the Draa River feeding the lake and the flamingos' breeding site dried up.

Finally this year a team that included members of the Research Group for the Protection of Birds in Morocco (GREPOM) has confirmed the presence of at least 120 breeding pairs of greater flamingos at the Khnifiss Lagoon, more than 840 kilometres (520 miles) southwest of Rabat.

GREPOM and Morocco's National Agency for Water and Forests had employed a detailed strategy to encourage the greater flamingos to breed, involving the construction of artificial nests at Khnifiss, and at Sebkha Bou Areg, a lagoon in the north-east.

But the lead author of a recent report on the colony says the birds, known for their pale pink feathers tinted from carotenoids they get from eating algae and molluscs and other invertebrates, spurned the fake nests.

Mohamed Radi, a biology professor at the University Cadi Ayyad Normal School Superior of Marrakech who is also a GREPOM project coordinator, told RFI that the flamingos chose an area to nest in near the southern part of the lagoon.

"It's a colony that the birds set up themselves in Sebkha Tazgha...far from where the artificial nesting platforms were built."

Paul Rose, co-chair of the Flamingo Specialist Group, part of the International Union for Conservation of Nature's (IUCN's) Species Survival Commission, confirmed that flamingos in zoos shun man-made nests. But, he told RFI, the flamingos at Khnifiss "may have seen the artificial nests as a potential 'left over' from past breeding and therefore decided to stop and nest in a location of their own choosing.”

What is absolutely certain is just how positive the news of the breeding pairs at the Khnifiss site is for the long-term future of these fussy birds.

"The greater flamingo is a very sensitive species," said Radi. He said flamingos had been observed conducting courtship displays at several other wetlands in the North African country, but no other successful nesting in Morocco has so far been recorded.

The birds require abundant food, sandy clay soil, islands surrounded by water to protect them from predators, and shelter from human disturbance.

"If one of the four requirements is not met, nesting cannot take place," he said.

Wetlands everywhere are under threat from urbanisation and agriculture.

"Any new nesting sites are great news for this species because it can provide ideas for habitat and wetland management that can help make wetlands in other parts of the world suitable for other species of flamingo to nest in," said Rose, the IUCN specialist.

"Predictions of climatic change on wetland areas may cause some nesting sites to be unusable for flamingos in the future, so creating and maintaining new sites that can be used by the birds 'future-proofs' these populations," he said.

The provision of artificial islands and decoy nests encouraged greater flamingos to nest at a coastal wetland site in Bouches-du-Rhône, France, from 1974-1993.