Book Release: “An Intellectual Biography of Africa: A Philosophical Anatomy of Advancing Africa the Diopian Way.” 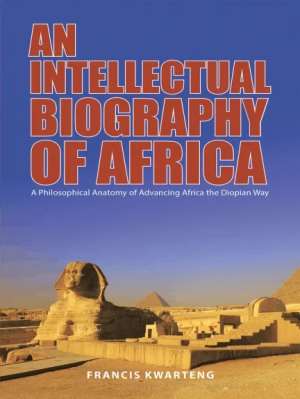 Africa is the birthplace of humanity and civilization. And yet people generally don’t want to accept the scientific impression of Africa as the birthplace of human civilization. The skeptics include Africans themselves, a direct result of the colonial educational systems still in place across Africa, and even those Africans who acquire Western education, particularly in the humanities, have been trapped in the symptomatology of epistemic peonage. These colonial educational systems have overstayed their welcome and should be dismantled. This is where African agency comes in. Agential autonomy deserves an authoritative voice in shaping the curricular direction of Africa. Agential autonomy implicitly sanctions an Afrocentric approach to curriculum development, pedagogy, historiography, literary theory, indigenous language development, and knowledge construction. Science, technology, engineering, mathematics? Information and communications technology (STEM-ICT) and research and development (R&D) both exercise foundational leverage in the scientific and cultural discourse of the kind of African Renaissance Cheikh Anta Diop envisaged.

“Mr. Francis Kwarteng has written a book that looks at some of the major distortions of African history and Africa’s major contributions to human civilization. In this context, Mr. Kwarteng joins a long list of thinkers who roundly reject the foundational Eurocentric epistemology of Africa in favor of an Afrocentric paradigm of Africa’s material, spiritual, scientific, and epistemic assertion. Mr. Kwarteng places S.T.E.M. and a revision of the humanities at the center of the African Renaissance and critiques Eurocentric fantasies about Africa and its Diaspora following the critical examples of Cheikh Anta Diop, Ama Mazama, Molefi Kete Asante, Abdul Karim Bangura, Theophile Obenga, Maulana Karenga, Mubabingo Bilolo, Kwame Nkrumah, Ivan Van Sertima, W.E.B. Du Bois, and several others. Readers of this book will be challenged to look at Africa through a critical lens.”

Ama Mazama, editor/author of Africa in the 21st Century: Toward a New Future

“There are countless books about the evolution of European intellectual thought but scarcely any that captures the pioneering contributions of Africans since the beginning of recorded knowledge in Kmet, a.k.a. Ancient Egypt. Well, that long drought has ended with the publication of Kwarteng's An Intellectual Biography of Africa: A Philosophical Anatomy of Advancing Africa the Diopian Way. Prepare to be educated.”

Milton Allimadi, author of Manufacturing Hate: How Africa Was Demonized in the Media

What again do you have for Ghanaians besides economic theori...
37 minutes ago