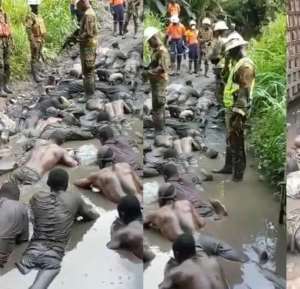 The Minority in Parliament has condemned the use of unlawful means by security personnel deployed by the government to deal with illegal miners.

The expression of displeasure comes after the incident last Friday when some suspected illegal miners were arrested in Obuasi by soldiers while allegedly mining on a concession belonging to AngloGold Ashanti.

The illegal miners numbering over 30 after the arrest was allegedly forced to swim in muddy waters.

Some of the illegal miners were allegedly tortured by the soldiers as punishment for engaging in illegal mining.

Unhappy after the incident, the Minority in Parliament has engaged the media today to condemn what action of the men in uniform.

Speaking to the media, John Jinapor who is the minority spokesperson on Mines and Energy Committee of Parliament stressed that the abuse of the illegal miners is unacceptable.

He has taken a swipe at President Nana Addo Dankwa Akufo-Addo, insisting that his government’s continuous disregard for the laws of the country is unacceptable.

“We strongly condemn the use of brute, excessive and disproportionate force in the so-called fight against illegal mining. This flagrant disregard for our laws and constitution under the Akufo-Addo government is unfortunate and must be roundly condemned,” John Jinapor told the media.

The Minority in Parliament wants an independent investigation to be carried out into the arrest and abuse of the suspected illegal miners.