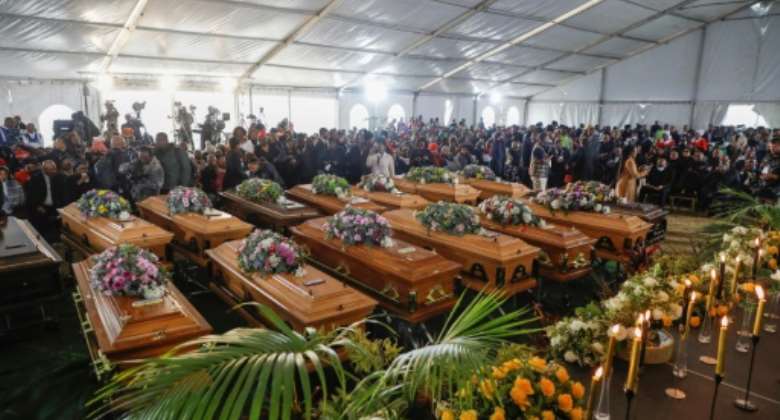 A memorial service for the 21 dead, in which empty coffins were used to symbolise the loss, was held in East London on July 6. By Phill Magakoe (AFP)

The deaths of 21 young people at a South African tavern more than three weeks ago remains a mystery as a preliminary toxicology report was inconclusive, provincial authorities said Tuesday.

Tests conducted by a Cape Town lab found alcohol and carbon monoxide in the victims' blood but not at deadly levels, said Dr. Litha Matiwane from the Eastern Cape provincial department of health.

"What we found was for blood alcohol levels, levels ranged from 0.05 grams to 0.26 grams per 100 millilitres, which itself is not conclusive for lethal toxicology," Matiwane told a televised media briefing from East London.

The lab also found methanol in the blood of all the victims, and further testing is underway to determine the levels, Matiwane said.

Twenty-one people aged between 14 and 20 were found dead on June 26 at the Enyobeni tavern in Scenery Park, a township in the coastal city of East London.

Survivors described a mad dash to escape the jam-packed premises and at least one person reported a suffocating smell.

Thirty-one people were hospitalised with symptoms ranging from backache and tight chests to vomiting and headache.

A stampede has been ruled out as the cause of death.

Eastern Cape provincial leader Oscar Mabuyane said the government was working with families of the victims to ensure they had every support, and insisted the cause of the tragedy would be found.

President Cyril Ramaphosa has blamed the deaths on the "scourge of underage drinking" and vowed to crack down on "unscrupulous" bar keepers who flout regulations.

Since then, the bar's 52-year-old owner and two employees aged 33 and 34 have been arrested for allegedly breaching alcohol sale regulations, police had said.

The owner is expected to appear court on August 19 while the two employees have each been fined 2,000 rand ($118).