“We can bring back the economy………..” Nana Akufo Addo 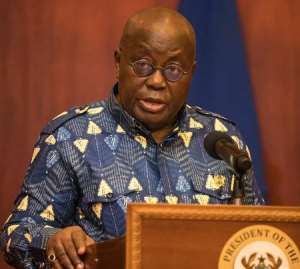 President Akufo Addo made this famous statement that caught the attention of the world. He said he can bring back Ghana’s economy but he cannot bring back those who will die as a result of the coronavirus. I believe whoever wrote this speech got promoted because it received the world’s commendation. I hope the speech was not plagiarized.

This means that when Nana Addo was reading that nice speech, he didn’t understand what he read and he didn’t mean what he read. He knew the economy was on its way back to the IMF but he still deceived the world. Hasn’t this and sloganeering been the trademark of his administration?

When Dr. Bawumiah was telling Ghanaians why they went back to IMF, he stated among other things that the Banking Sector Clean-up and Excess Capacity payments were among their reasons. If Dr. Bawumiah admitted that, didn’t it confirm what the World Bank Country Director said? He said the economy was on its knees before COVID came.

Dr. Bawumiah was not ashamed to say the COVID and the Russian war also contributed to their going back to the IMF. Today, they will say COVID took them to IMF, then tomorrow, they will say Nana Addo was amongst the best five Presidents in the world that managed COVID-19 well in his country. By the way, has our neighboring countries also gone to IMF? Wasn’t it this same Dr. Bawumiah who in 2016, asked how external factors could cross-over our neighboring countries and attack only Ghana? Can Dr. Bawumiah answer that question today?

Has Nana Addo and Dr. Bawumiah seen the wisdom when John Mahama told them they have no idea how to govern a country? Would they apologize to him now or they want to wait until they leave office in 2025?

Dr. Bawumiah is now short of motivational speeches so he has to come out and say, he prefers Ghana Card to a thousand interchanges. He wants to be politically relevant. Dr. Bawumiah should be told that not everyone is getting his/her Ghana Card the same way he got his. Millions of Ghanaians are still struggling each day for their Ghana Card and if Dr. Bawumiah is saying how important the card is, he should find out what is going on at the NIA offices.

Fellow Ghanaians, Nana Addo made a fantastic speech he didn’t understand. He couldn’t bring back the economy and now our economy is in the hands of the IMF. Those “small small” boys are going to show the 78 year old how to run his country. What is more disgraceful than that?.