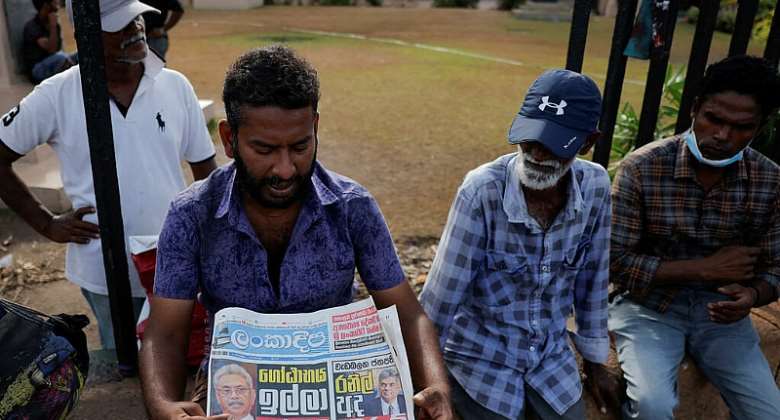 The resignation of Sri Lanka's president has been accepted, the crisis-hit country's parliamentary speaker announced Friday, after he fled the country earlier this week, prompting relief. Ranil Wickremesinghe was sworn in as acting president until parliament elects a new president on Wednesday.

The formal declaration makes Gotabaya Rajapaksa the first Sri Lankan head of state to resign since it adopted an executive presidency in 1978.

He emailed his resignation from Singapore after flying to the city-state from the Maldives, where he initially escaped after demonstrators overran his palace at the weekend.

Outside the presidential secretariat, at the makeshift headquarters of a months-long protest movement against Rajapaksa, Catholic priest Jeevantha Peiris told French news agency AFP: "This is a historical moment for all Sri Lankans.

"We were assaulted, put in prisons, put on travel bans, some of our friends laid their lives down. With all these hardships we have come through," the 45-year-old said. "We have no fear anymore."

The former president, he added, was a "bloodthirsty criminal" who should return to Sri Lanka to face justice.

Prime Minister Ranil Wickremesinghe was sworn in as acting president - his accession was automatic under Sri Lanka's constitution - but many of the demonstrators see him as complicit in the rule of the Rajapaksas and also want him to go.

Parliament will meet on Wednesday to elect a MP to succeed Rajapaksa for the rest of his term, the speaker's office said, with nominations due the previous day.

Rajapaksa's departure came after months of protests over what critics said was his mismanagement of the island nation's economy, leading to severe hardships for its 22 million people.

He, his wife Ioma and their two bodyguards arrived in Singapore from the Maldives on board a Saudia airline flight.

As president, Rajapaksa enjoyed immunity from arrest, and he is understood to have wanted to go abroad before stepping down to avoid the possibility of being detained.

The former Maldivian president Mohamed Nasheed is believed to have played a behind-the-scenes role in getting him out of the country, and said Rajapaksa feared he would be killed if he remained.

"I believe the President would not have resigned if he were still in Sri Lanka, and fearful of losing his life," Nasheed tweeted.

Singapore's foreign ministry confirmed Rajapaksa had been allowed to enter the city-state for a "private visit", adding: "He has not asked for asylum and neither has he been granted any asylum."

He is expected to look to stay in Singapore for some time, according to Sri Lankan security sources, before potentially moving to the United Arab Emirates.

In Colombo, demonstrators on Thursday left several of the emblematic state buildings they had occupied in recent days after Wickremesinghe instructed security forces to restore order and declared a state of emergency.

The capital was put under curfew and armoured personnel carriers patrolled some areas.

Hundreds of thousands of people had visited the prime minister's compound since it was opened to the public after he fled and his security guards backed down.

By Thursday afternoon, the gates were closed, with armed guards posted both inside and outside.

Police said a soldier and a constable were injured in clashes with protesters outside the national parliament as security forces beat back an attempt to storm the legislature.

Protesters also left the studios of the main state television station after breaking in on Wednesday.

The main hospital in Colombo said about 85 people were admitted with injuries on Wednesday, with one man suffocating to death after being tear-gassed at the premier's office.

The military and the police were issued fresh orders Thursday to firmly put down any violence, and warned troublemakers they were "legitimately empowered to exercise their force".

More from Asia
ModernGhana Links
Youth ChangeMakers: An idea can change the world…
IOM Calls For Urgent International Humanitarian Support for Pakistan
With More than Half of Afghans Dependent on Humanitarian Aid, IOM Calls for Sustained Support
TOP STORIES