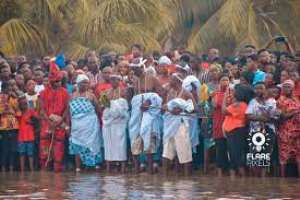 The 2022 Ada Asafotufiami festival is slated for the first week of August tagged as [email protected] is a symbolic gesture to connect the past, present, and future generations through a book that would serve as a motivational manual and blueprint for the next generation to learn from.

85 rare experiences, 85 inspirations, 85 aspirational strategies, and 85 honours and awards would be presented to celebrate individuals whose careers, professions, leadership, and entrepreneurial spirits have had an immense impact on the building of the Ada State over the past 85 years.

The 2022 Ada Asafotufiami festival would also serve as a platform to celebrate natives who keep flying high the name of Ada wherever they found themselves in character over the past 85 years.

Mr. Seth Priceless Ala-Amegavie, the Managing Director, Spaa Media, a communication, marketing, and events management company told the Communication for Development and Advocacy Consult (CDA Consult) in Ada that the idea was to honour heroes and heroines.

It would as well acknowledge excellence while encouraging the current generation to have a meaningful impact on community development in Ada.

Mr. Ala-Amegavie said the project would be rare and interesting as 85 amazing people would share their interesting stories with the rest of the world thus their beginning inspirations and aspirational strategies to help the next generation of young people to learn and contribute to national development.

He stated that recognizing torchbearers and celebrating their stories was fulfilling hence support for such an initiative should be welcomed with all hands; “we are people who hardly document our stories and this project will inspire many more people to archive and document their stories".

The Spaa Media Managing Director explained that the 85-torchbearers would serve as ambassadors to renovate the only Ada Community library to help research works.

He said the project would also establish an educational fund noting that the 85-torchbearers book sales will have 50 percent dedicated to it, to help students realize their academic dreams.

Mr. Ala-Amegavie further indicated that the 85 torchbearers would be decorated with plagues, citations, and certificates for their outstanding contribution toward the development of the Ada State over the years and the years to come.

"As torchbearers, telling the Ada story, embedded in our fabrics and hold the forth is the only way to protect our heritage," he added.

Mr. Ala-Amegavie noted that as part of the project, there would be 85 trees planted in honour of the deserving dignitaries and they would be required to be present on the day of the exercise as the trees will be named after them.

He said the significance of the exercise was to inculcate a new culture of not just environmental conservation but also cultural and value perspective of the Ada State.

"85 trees planted in honour and named after the 85-torchbearers at Togbloku as we commemorate the 85th edition of Asafotufiami," he explained.

Answering questions on why Togbloku, a suburb of Ada was chosen among the others, he said the community was chosen for the historic reasons of the Ada people.

"It's a place they stayed over 100 years through their many travels. So planting trees of the torchbearers would serve like a process of rebuilding our ancestral home while honouring sons and daughters who continue to fight, igniting the flames for change," he noted.

He said the place would be designated as a memorial park when the trees grow and later turned into Ada Children's playground.