Strike is the only option to communicate to government — Amedor 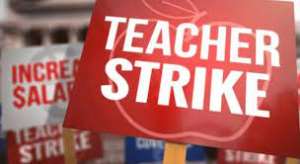 Laying down our tools is the only medium available to drum home our grievances to the government, Mr. Nicholas Tetteh Amedor, a second cycle teacher in Ada in the Greater Accra Region has said.

According him the strike has become a requirement for teachers to live on after several negotiations with their union leaders failed.

Speaking in an interview with the media in Ada as monitored by the Communication for Development and Advocacy Consult (CDA Consult) Mr Amedor said “if teachers cannot have the Cost of Living Allowance (COLA) through negotiations then the ultimate is the strike which is the only ideal option to communicate their actions and grievances”.

Mr. Amedor explained that the recent economic hardship and the galloping rise in the price of goods against workers’ salaries was enough evidence to push for the COLA.

"In my view, other public sector workers in different fraternities are feeling the same hit of Ghana's worst economic situation," he added.

The teacher noted that the government must not wait until other sectors join the strike which according to him would probably worsen the issue.

Mr. Amedor, said the education sector wields the majority of the government's sector workers and it is always believed that the sector has always sided with the government in determining meagre salaries for workers in Ghana noting that the teacher unions would by this strike prove to the others how they want the earlier perception to be erased.

Answering questions on the effects of the strike on students, he said any slight delay in addressing their grievances would have a dire consequence on the current West African Senior School Certificate Examination (WASSCE) candidates who were scheduled to commence this year's examinations from Monday, August 1, 2022, until Tuesday, September 27, 2022.

According to him, the candidates forfeited a whole semester in their first year when schools were closed down to prevent the spread of the coronavirus adding that, "all that we look up to is better salary to help us keep active in our work."

Mr. Amedor stated that headmasters and headmistress should take note that it was the teacher union leaders who negotiate their salaries with the government and, therefore, the need to respect the decision of the union leaders.

"Though this is a nationwide strike, it'll interest you that some heads of pre-tertiary institutions have threatened their staff with a query if they stay away from the classroom," he stressed.

The teacher also advised pre-tertiary institution leaders not to allow their political affiliation to take sides in the situation.