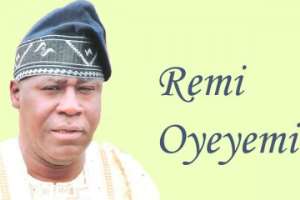 It is a great disservice to engage in intellectual hooliganism in public discourse. This kind of act is also a threat to sanity, injurious to the polity and harmful to History.

When this course is taken, it not only incinerates the mental balance of the protagonist of such hooliganism eventually, it colours his/her perspectives of reality and lead him and the unwary adherents into unwarranted discombobulation. It paralyzes their ability to take correct decisions when there is need for it. At the end, the protagonist and his followers are left in the lurch, frustrated and glowing in woeful failure.

What is "intellectual hooliganism?" It is not much different from "intellectual dishonesty." The only difference between the operative words "hooliganism" and "dishonesty" is that the hooligan is very brazen, blatant and unabashed. He is shameless. He exudes odious pride in his obnoxious arrogance. He is audacious and brash. He operates with a high degree of depravity that is disgusting and repulsive in its ordinariness.

The intellectual hooligan is effusive in his effrontery. He is exuberant in his temerity. He has no respect for facts. He is a deliberate obfuscator. He hawks falsehood knowingly. His lies are salient with sass. His impudence reeks with insolence. He doesn't not care if his falsehood creates any damage in the polity. A kind of a narcissist with a permeation of the crudest nastiness. He is also a sadist who is edified by the confusion he creates, silently enjoying while watching reactions to his diabolical trade.

He is an undesirable element. Usually, he possesses the gift of sophistry. Smooth in his debauchery, he glides in falsehood like the shark would do in the deep ocean. Endowed with a veritable degree of intelligence, he is manipulative and simister. The uncritical and the unwary are attracted to him like flies are to dead bodies. Often, by the time the "flies" discover that they have been taken, they would be in the grave with the dead body.

There is no society lacking in his genre. He sees "white" and would insist it is "black." He would see a man with big chest and insist that he is a woman, if not an hermaphrodite. He would see a bat and confuse others that it is a dove. One thing happens, he would barefacedly insist that many things happen. He is a dexterous manufacturer of fiction and faction. His fictions and factions are not meant for novels, literature or theater halls. They are meant to confuse, miseducate, misinform, mislead, and foster a poisonous narrative.

The intellectually dishonest has a modicum of difference. Though, essentially the motive and the mission are the same. The tools are also the same - lies, falsehood, half-truths et al. The dishonest projects subtlety in its style and approach. He is gentle and methodical. His operational method is akin to that of the proverbial green snake. He is no less lethal and luciferous. He diabolically exudes a scintilla of shame. He makes efforts to drape his tapestry of titillated tall tales in pretentious reason, with an aroma of pernicious civility.

He is less brazen but also audacious. He has no choice but to be flagrant in other to sell his nauseating wares. Deception and duplicity are also important to the dishonest. Being hypocritical is a familiar trait. He also has no respect for facts. Where he had the need for facts, he bends them that those facts become so crooked and unidentifiable at the end. When they are evidently insane, if we go by the definition of "insanity" in Psychology and Psychiatry, they project a weird form of mental alertness that confounds.

A veritable excuse from their quarters is that they "are doing their jobs." Theirs is to lie to the polity. It is to deceive. Theirs is to mislead and misinform. Theirs is to miseducate and misguide. On Social Media platforms, their is to twist facts and maul History. They hawk unverifiable narratives and engage in obnoxious exudation of pretentious intellectuality. They are chronic and pathological in their shamelessness.