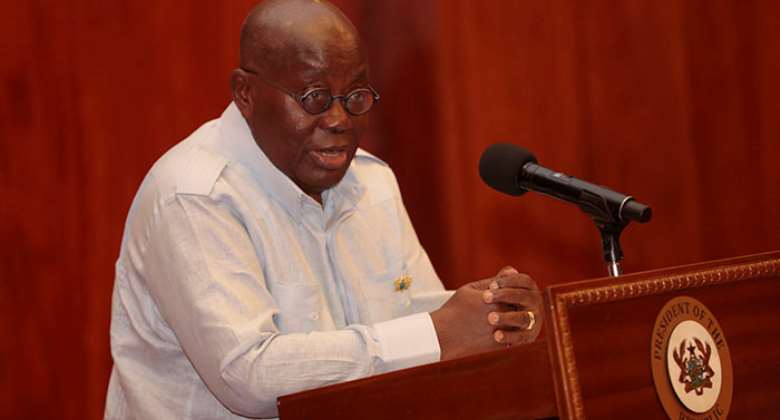 I would not blame Akufo-Addo for the economic hardship the whole world is seeing, but rather would join the callers for his resignation for

1. his inability to discipline his staff, including the 3,000 appointed by him some of who he may not remember, with the ghost names not being addressed; and yet

2. making no effort to reform the Constitution and improve on the 1992 document, and

3. inability to eliminate the conflict of interest in our governance system and initiate Ethical standards!!

Allowing his nephew Ken Ofori Atta to use his company Databank to earn an estimated $30-100 million or more, from loan brokerage procurement for Ghana, is wrong and should be illegal while we the taxpayers pay him! And

4. For failing to allow the rich commercial and residential property builders to contribute their fair share of taxes so we can build our roads and sewage systems and institute clean and healthy environment and sanitation!

Sure Nana Akufo-Addo was educated in UK in his earlier days, but one doubts if other than his English-speaking skills and accent he learned anything besides Arithmetic and English in England. Even the Arithmetic may be weak, or in doubt, as one examines his economic output.

Education was supposed to help us analyze and make decisions. How do you keep increasing government staff, while offering free SHS, and unable to predict the value of revenues from real estate! How do these people in Government think places like America and European nations generate revenue? By selling cocoa and minerals?

The man Nana Akufo Addo speaks well. I like him for being a leader on the ground and joining some us who were fighting to return Ghana to a democratic governance system in the 1990s. However, the good Book says:

“In all labor there is profit but the TALK of the LIPS tendeth only to perjury (Ohia or poverty)” (Proverbs 14:23)

It seems Nobody in the world can out-talk us Ghanaians oo!!

But at the end of the day all the travels and education we acquired go to waste if we don’t use our education and take templates from the places we have studied, and learn, copy and emulate, enforce discipline to build our nation!

The obstructive thinking- “eha deɛ saa” principles, plus evil thoughts of envy, will keep us in the same boat forever till some other people come and take our people as slaves! Is that what we want?

Let’s read history and it seems even in Biblical times our people have been about the only people who have been carted into slavery!

Today our women are being deceived and sold by crooked and evil Employment Agents as slaves (call it domestic servants) in Saudi Arabia and the Middle East. Some are being forced to have sex with dogs and their masters! What a disgrace for a people who refuse to fight!

Please read and watch how Shaka Zulu. He is the one leaders we recall in Africa who created a mighty empire with his strong Spirit and courage, defying traditions and using will power to discipline his people and creating a reasonable sized empire.

Supposing Shaka had the education and exposure to the rest of the world as we do in the modern day, his South African Zululand could have been the equivalent of the Netherlands or Germany and never allow those whites to take South Africa!

Today we run away like we did in the old Ghana Empire around 1237 - many of us (including this writer) have been forced to seek employment and livelihood and even retirement outside. We still invest a lot of our money in Ghana- and people like some of us will never give up on our people. We are now strategizing to fight in the courts and ignore the Naysayers!