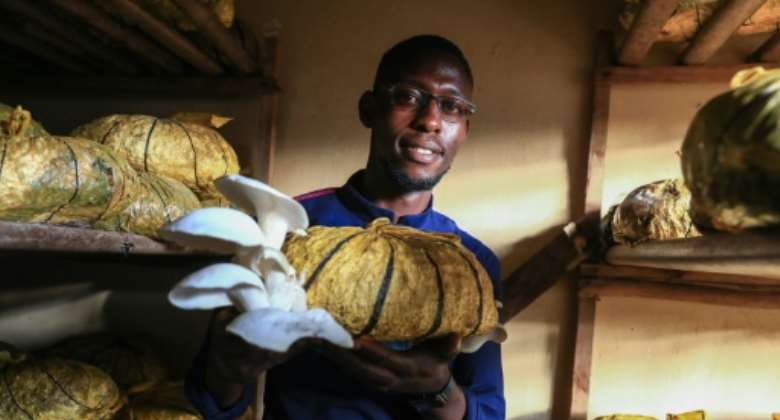 Fungiculture, or the cultivation of edible mushrooms remains very rare in Africa, despite the advantages of being almost free. By Daniel Beloumou Olomo (AFP)

Grilled on skewers, dried or used in hair oil: farmers at Bafoussam in western Cameroon are seeking to take the lowly mushroom, grown on agricultural waste, beyond the kitchen.

Fungiculture, or the cultivation of edible mushrooms, is long-developed in the West, while China has become by far the world's largest producer.

But it remains very rare in Africa, despite the advantages of being almost free and supplying "clean" food by recycling waste.

Cameroonians are particularly fond of mushrooms but have to wait for the rainy season to identify and gather the edible fungi in the wilds of the west-central African country.

In Bafoussam, capital of the Western region and fifth largest city, Jean-Claude Youbi saw an opportunity to exploit, like other small farmers around the nation of 28 million inhabitants.

Youbi grows thousands of oyster mushrooms in a darkened room of the Common Initiatives Group — GIC Champignon — which he launched with associates in Maetur, a district of Bafoussam, four years ago.

To obtain the soil-free culture, corn cobs are mixed with nutrients such as bran flour, wheat and ox blood. By Daniel Beloumou Olomo (AFP)

"We are in the mushroom house of our GIC," Youbi announces proudly amid the rows on rows of fungi growing on shelves on agricultural waste packaged in plastic bags.

"Some, like these, have passed the harvest period," says one of his associates, Patrick Yaptieu, pushing aside a pile of mushrooms which have turned from the desired white colour to a yellowish hue. He then puts the good harvest of the day in bags headed for the GIC shop, near the city centre.

A kilo of oyster mushrooms sells in Bafoussam for 2,000 CFA francs (just over three euros / $3.11), while it costs up to 3,500 CFA in Yaounde, the capital, or Douala, the main port and economic capital.

The lack of official national data on the production and consumption of mushrooms makes it hard to gain an idea of the market value and extent of the sector.

Activity in the GIC Champignon premises is punctuated by constant comings and goings, while two young trainees in a little side room are shovelling a pile of agricultural residue.

A kilo of oyster mushrooms sells in Bafoussam for 2,000 CFA francs, just over three dollars. By Daniel Beloumou Olomo (AFP)

"We added a fungicide to it to avoid the bad mushrooms," he says, adding that the effects of this precautionary treatment fade away after two weeks, well before the good crop grows.

Once the substrate mixture is ready, it is sterilised, placed in barrels and heated over a wood fire, then cooled down and placed in the plastic bags. Once the spores are introduced, the bags are placed in the mushroom house, where it takes 30 days to see the first stems appear.

"I was amazed to discover this way of cultivating mushrooms," says Junior Leogip, a boy of 12 who is devoting his school holidays to do an internship at GIC Champignon.

"I learned to prepare the substrate... I want to know everything," Leogip adds, his heart set on winning a place in an agricultural college after his baccalaureate.

"My ambition is to launch my own production and be independent," says Lea Tona, another trainee who comes from Yaounde.

Every three months, the time it takes for a full growth cycle, the business in Bafoussam produces from 300 to 400 kilos (660 to 880 pounds) of mushrooms, 80 percent of which are sold directly to customers to be eaten.

Once the substrate mixture is ready, it is sterilised, put in barrels and heated over a wood fire, then cooled and bagged up. By Daniel Beloumou Olomo (AFP)

The remainder is transformed into body and hair oils, soap, juice and even a liqueur that Youbi presents as "mushroom whisky".

In a small laboratory at the GIC, Youbi grinds part of the harvest in a blender to obtain a juice which will be combined with other elements for the range of by-products.

"For beauty oils, we can add snail slime and a perfume to give a pleasant smell," he says, guarding his secrets close his chest.

"We're in a promotional phase. For the hair oil, we give boxes to some hairstylists to experiment with."

"It softens the hair and makes it grow back, it treats dandruff, breakage," says Josiane Sogo in her hairdressing salon.

Some people prefer simply to taste the fungi.

"I am a very big consumer of mushrooms, especially for their virtues. It is a vegetable meat that helps me steer clear of several risks," affirms Barthelemy Tchoumtchoua, noting that his skewer is rich in protein and vitamins B2, B3, B5 and D.

Thanks to fungiculture, "we can eat them all year round", he adds enthusiastically.