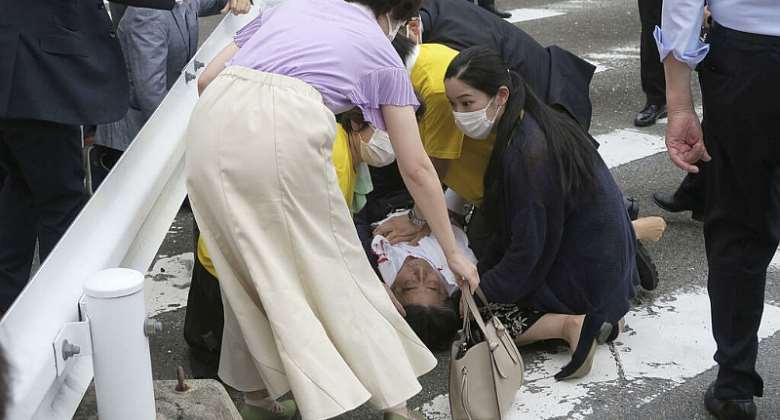 Japanese former prime minister, Shinzo Abe, was shot and seriously injured while he spoke at an election rally in the western region of Nara on Friday. Local media are reporting that the former premier is showing no vital signs.

Japan's former prime minister Shinzo Abe was shot at a campaign event on Friday, a government spokesman said, as local media reported the injured politician was showing no vital signs.

French President Emmanuel Macron was among world figures to express his shock and condemnation of an "unspeakable" attack.

"Former prime minister Abe was shot at around 11:30 am," in the country's western region of Nara, chief cabinet secretary Hirokazu Matsuno told reporters.

"One man, believed to be the shooter, has been taken into custody. The condition of former prime minister Abe is currently unknown."

Local media including national broadcaster NHK and the Kyodo news agency said the former prime minister appeared to be in "cardiorespiratory arrest", a term often used in Japan before a feared death can be officially confirmed by a coroner.

Abe had been delivering a speech at an event ahead of Sunday's upper house elections, with security personnel present.

Eye-witnesses spoke of two gunshots being fired at the former PM, from behind.

Abe, who is 67 years old, collapsed and was bleeding from the neck, a source from his ruling Liberal Democratic Party told the Jiji news agency.

An official at Nara Medical University hospital told the French AFP news agency: "What we can share now is that his transfer here has been completed," declining to comment on the former leader's status.

World leaders were quick to condemn the attack and offer their sympathies and support to the injured man's family.

"Our thoughts are with the family and friends of a great man."

"This is a very, very sad moment," US Secretary of State Antony Blinken told reporters at the G20 meeting in Bali, saying the United States was "saddened and deeply concerned.

"We don't know his condition," Blinken continued. "Our thoughts, our prayers are with him, with his family, with the people of Japan."

European Council president Charles Michel said he was "shocked and saddened by (the) cowardly attack".

"My thoughts are with him and his family," he tweeted. "#NATO stands with the people of our close partner #Japan."

The French embassy in Japan expressed concern over the "hateful" attack, saying its thoughts were with Abe and his loved ones.

"The French Embassy has learned with emotion and dismay of the hateful attack on former prime minister Shinzo Abe in Nara," the mission said on Twitter.