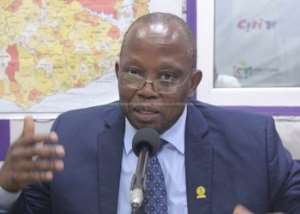 Former Auditor-General, Daniel Yao Domelevo, has been appointed to the Audit and Finance Committee of Global Fund.

The board approved his appointment, together with 11 others on the committee, on 4th May 2022.

The Global Fund is a financing institution, providing support to countries in the response HIV, TB and malaria and commits about US$4 billion a year to the various programmes.

Domelevo who was relieved of his position by Ghana’s President Nana Addo Dankwa Akufo-Addo after going on compulsory leave late 2020.

How was Domelevo retired?

Domelevo was asked by the President, Nana Addo Dankwa Akufo-Addo, to proceed on accumulated leave.

On March 2, a day before Mr. Domelevo was scheduled to return from his controversial forced leave , the Audit Service Board questioned his nationality and age.

The Board claimed Mr. Domelevo should have retired in 2020 and that he was a Togolese.

The Audit Service Board, based its claims on records at the Social Security and National Insurance Trust (SSNIT) provided by the Auditor General.

Mr. Domelevo however refuted these claims in further correspondence.

The Presidency endorsed the retirement claims of the Audit Service Boar,d and said it considered Mr. Domelevo retired.

“The President is of the view that you [Domelevo] have formally left office,” the letter from the presidency said in response to the date of birth concerns.

In a letter, the Presidency thanked him for his service.

Although critics and Civil Society Organisations said the President acted in bad faith, Nana Akufo-Addo said his decision was justified.