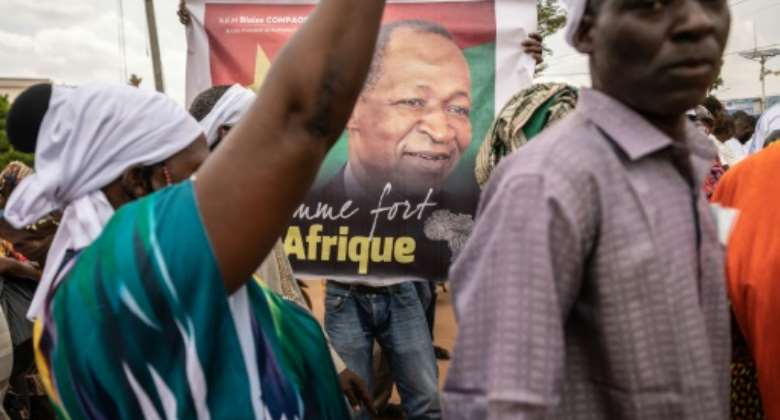 A man holds a poster depicting Blaise Compaore, former president of Burkina Faso, in front of Ouagadougou airport just before his return from eight years in exile. By Olympia DE MAISMONT (AFP)

Former Burkina Faso president Blaise Compaore returned to Ouagadougou on Thursday after eight years in exile, members of his entourage and an airport source told AFP.

Compaore, 71, flew in from Ivory Coast, where he has been living, for a summit of ex-presidents with the country's new strongman, Lieutenant-Colonel Paul-Henri Sandaogo Damiba, who was sworn in as president earlier this year following a coup.

Compaore's plane, provided by the Ivorian presidency, landed at the military base in the Burkinabe capital in early afternoon.

Meanwhile dozens of the ex-president's supporters had gathered at Ouagadougou's main international airport where they expected him to arrive.

"We have come to welcome him and show him our respect," said Alida, a 36-year-old teacher from the former head of state's home village of Ziniare, about 30 kilometres from the capital.

"It's a great day for us, it's a new story that is being written from today," she told AFP at the airport.

It is the first time the ex-president has set foot on home soil since he was forced into exile in neighbouring Ivory Coast in October 2014, after violent popular riots broke out against his plans to remain in power after serving as president for 27 years.

Compaore had seized power in a coup in 1987, on the same day that Burkina's revolutionary leader Thomas Sankara -- his former comrade-in-arms -- was gunned down by a hit squad.

His return home on Thursday is not a permanent one. He has been invited to stay for a few days by Damiba, the leader of a coup in Burkina Faso in January which forced out elected president, Roch Marc Christian Kabore.

Former Burkina Faso president Blaise Compaore arrived in Ouagadougou from Ivory Coast, where he has been living. By DIETER NAGL (AFP/File)

Along with the other remaining former presidents of Burkina Faso, Compaore is due to take part in a meeting to "accelerate national reconciliation" in the face of the jihadist attacks that have been plaguing Burkina Faso since 2015 and have multiplied in recent months.

Damiba hopes to create a "sacred union" around him to help fight jihadist groups.

Friday's meeting between the current and former Burkinabe leaders is being organised to "pool energies and synergies... to fight effectively against the tragedy that has struck us", according to a government spokesman.

Also attending the meeting will be Jean-Baptiste Ouedraogo, who served as president for under a year in 1982-1983, Isaac Zida, who briefly took power in 2014 and is currently in exile in Canada, Michel Kafando who was in power in 2014-2015, and Kabore, elected in 2015 and overthrown in January.

Compaore's return home has not been unanimously welcomed.

In April, he was sentenced in absentia to life imprisonment for his role in the assassination of his predecessor Sankara in 1987.

"It would be a travesty if Blaise Compaore came to Burkina Faso and left happily. It would mean that in our country, there is no longer any justice or law," said Benewende Stanislas Sankara, one of the Sankara family's lawyers.

Ra-Sablga Seydou Ouedraogo, director of the Free Afrik think-tank, believes that reconciliation should not equal impunity.

"How does the consecration of impunity serve the fight against terrorism?" he asked.

The presidency said on Wednesday: "This meeting, which is important for the life of the nation, does not hinder the legal proceedings against certain people."

Address energy sector challenges; it's contributing to Ghana...
4 hours ago