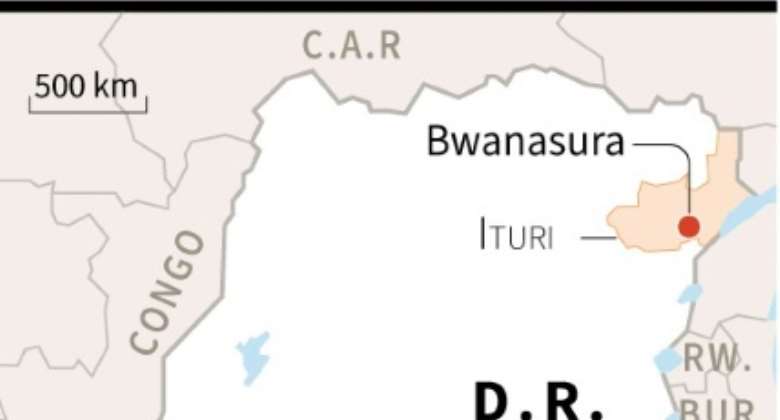 Map of the Democratic Republic of Congo locating Bwanasura and Ituri, the scene of fresh violence. By (AFP)

Fresh clashes between M23 rebels and soldiers erupted in eastern DR Congo on Thursday, officials said, as the militia declared that it was not bound by a ceasefire agreement.

M23 spokesman Willy Ngoma told AFP that the deal brokered between the Congolese and Rwandan presidents in Angola on Wednesday was irrelevant.

"We are Congolese, not Rwandan," he said. "If there's a ceasefire, it can only be between us and the Congolese government".

Talks between the Democratic Republic of Congo's leader Felix Tshisekedi and Rwanda's Paul Kagame in Angola on Wednesday initially raised the prospect of a ceasefire between the M23 and the Congolese government.

Violence between the mostly Congolese Tutsi rebels and the DRC's army has flared in recent weeks.

The DRC has repeatedly accused neighbouring Rwanda of backing the M23, a charge the small central African country has always denied.

The M23's announcement on Thursday that it is not bound by the ceasefire, came after clashes between its fighters and Congolese troops broke out in Rutshuru territory in Congo's eastern North Kivu province in the morning.

A Congolese army commander accused the rebels of attacking military positions in the area in violation of the ceasefire. However, the M23 denied the claim and accused the army of starting hostilities.

The M23 -- or "March 23 Movement" -- first leapt to prominence when it briefly captured the eastern Congolese city of Goma in 2012 before it was driven out in a joint UN-Congolese offensive.

After lying mostly dormant for years, the group resumed fighting last November after accusing the Congolese government of failing to honour an agreement to incorporate its fighters into the army, among other issues.

M23 clashes have plunged relations between the DRC and Rwanda to its lowest point in years.

The relationship between the two countries had already long been strained since the mass arrival in the eastern DRC of Rwandan Hutus accused of slaughtering Tutsis during the 1994 Rwanda genocide.

Both countries have in recent weeks accused the other of carrying out cross-border shelling, triggering international appeals for calm.

On Wednesday, Congo's leader Tshisekedi met Rwanda's Kagame in the Angolan capital Luanda for talks mediated by Angolan President Joao Lourenco at the request of the African Union.

"We have agreed on a ceasefire, among other measures," Lourenco said at the end of the mini-summit.

The DRC and Rwanda agreed among other things to a "roadmap" towards normalising diplomatic ties, including through ending hostilities involving the M23 and the Democratic Forces for the Liberation of Rwanda (FDLR) -- a mostly ethnic Rwandan Hutu group active in eastern DRC.

The vast mineral-rich DRC is struggling to contain dozens of armed groups in its volatile east, many of which are a legacy of two regional wars a quarter of a century ago.