The Collapse of Ghana’s Health Sector 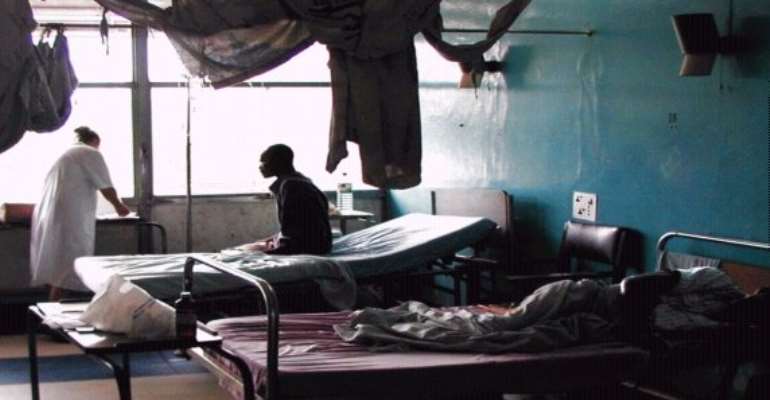 ...Selfish and uncaring Prosperity of Britain in Focus It is interesting how immigration and asylum issues became key political issues and concomitantly took centre stage in the media and other discussion forums in the run up to the general elections in Britain. The beauty of this whole exercise was how both the incumbent and the aspiring candidates tried religiously to sell their well-thought concepts on immigration and asylum to the electorate, especially the benefits Britain derives from immigration, her obligation to asylum seekers, how the quality of life is being dissipated by the influx of immigrants and asylum seekers-fake and genuine-among others.

What piqued my interest in this debate was the near silence of these politicians over the consequences of out-migration of professionals, especially those from the health sectors of poor countries like Ghana, on the wider socio-economic processes of these countries. It is interesting to point out that none of these politicians, in the just ended election addressed, this issue taking into account the need to help retain this breed of professionals in the third world to contribute to its development. When the issue of Africa and other poor countries appeared in the debate, the quick-fix solution or answer that came up and customarily was debt relief, and recently the debate to increase the annual kitty rich countries set aside for the African continent nick named 'the marshal plan for Africa'.

Let's consider the case of Ghana where the synergies of the push-pull factors have led to high levels of out-migration of health professionals depleting her health human resource to as low as 1 doctor to 20 954 persons (1:20 954), 1 nurse to 1 785 (1: 1 783) and 1 pharmacist to 101 000 (1: 101 000). Ghana had lost 51 doctors between 2000 and 2002 alone costing her $3.060 million and spent $3.396 million to train 66 doctors to maintain an appreciable level of staff. Projections are that it would cost the Ghanaian economy a colossal amount of $23.4 million to train doctors to maintain the status quo by the year 2006 (2002-2006). This amount should increase to $54.38 million with the cost of training other categories of health workers added. It is rather shocking that Britain, a rich country which can boast of 1 doctor to about 300 people (1:300) still continue to recruit health workers from Ghana and other poor countries reducing their capacity to cater for the detrimental effects of ill health on their citizens.

Although no major studies were found to link the effects of brain drain and health outcomes in Ghana, important health indicators point to the decreasing quality of health among Ghanaians. It is suggested that the decreasing quality of health among Ghanaians is partly due to the reduced capacity of the health sector to provide the needed care for people living with HIV/AIDS (PLWHAs) and other health requirements for the citizenry-infant mortality rates have increased and so is the reduction in the life expectancy of the Ghanaian between 2000 and 2003.

The argument that the NHS has a code of conduct to prevent the direct recruitment of health workers from poor countries, and the right of these individuals to voluntary migration are basically flawed arguments in the face of recent recruitment trends.

Rowson reports that health workers are now recruited by international recruitment agencies which are not covered by the ethical code. Nevertheless, health workers recruited by these organizations go on to work for public health institutions like the NHS in Britain.

The paradox here is that as much as these organizations are independent of the NHS, most of the professionals they recruit end up finally working for the NHS. It must be noted that these organizations are established by law and are punishable by the same law establishing them when the codes of these laws are flouted. They are therefore under every obligation to respect and obey agreements entered by their countries, prohibiting this form of recruitment.

The fact that Britain and other developed countries have not been able to promulgate codes to regulate the activities of these organizations is a manifestation of how beneficial this form of migration is to their economies and never in their interest to halt this process. This portrays, in a new guise, the exploitation of both human and material resources of the third world by the rich nations. Are the Scotland Yard not able to round up what they term illegal immigrants on factory floors and deport them to wherever they came from? Yes! Because they consider these vulnerable individuals economic migrants who could be removed even in the face of constitutionally guaranteed freedom of movement, but unable to prohibit international recruitment agencies from depleting our health human resources because the latter is more difficult to do.

On the issue of individuals guaranteed constitutional rights to freedom of movement, which has encouraged migration over the years, there is the need for the stringent implementation of legal instruments in the form of bonds to supersede the proviso on these guaranteed constitutional rights to freedom of movement, in the context of health worker migration. This legality must be considered as a matter of urgency in the face of the social capital invested in the education of this crop of professionals who, themselves, are caught up within the overall structure making choices to optimize their own particular ends.

Research has already shown that all internal attempts meant to motivate health workers to stay on at post have failed to yield the desired results. Other collaborative instruments, in the form of international codes for recruiting health workers from poor countries, have equally failed as a result of lack of respect for these international codes by the Developed countries It is now abundantly clear that not until Britain and other Western countries take steps to help reduce the attrition rates of health workers from Ghana and other poor countries, the trend will continue to increase at a very rapid state.

Article 4 of the UN General Assembly declaration adopted on December 4, 1986 confers on states the duty to take steps, individually and collectively, to formulate international development policies with a view to facilitating the full realization of the right to development. Therefore the continuous recruitment of health workers by the Developed Countries in the face of these international ethical codes must be seen as a flaw in international cooperation and an act of sabotage by the Developed Countries.

Leading on from the above, reference should also be made to Article 25 of the Universal of Human Rights which recognises the right to health service to all mankind, therefore the poaching of the health human resources of Ghana and other poor countries should be seen as the abuse of their human rights to health and development.

There is therefore the urgent need for the Ghana government and other poor countries' governments to team up to support local civil society organization groups to play international advocacy to bring the issue more and more under the international spotlight. This will in fact compel political leaders in the Developed Countries like Britain to show commitment to finding ways to minimize the trend. P.Y Tsikata University of Hull England Views expressed by the author(s) do not necessarily reflect those of GhanaHomePage.

E/R: 16 Arrested In Obregyima For Fighting Over Land
31 minutes ago