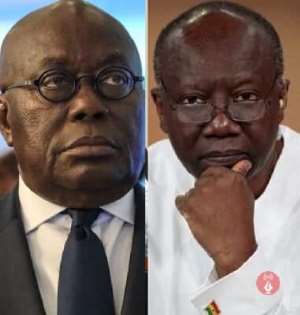 "For the first time in history, an oil-rich country, some five years into oil production, is seeking a bailout from the IMF" (Akufo-Addo 2015).

The current president tweeted the above post in April 2015, shortly after his predecessor, former President John Dramani Mahama engaged the IMF under a working program.

In what has been widely seen as shocking amongst the general Ghanaian public, given his track record of bastardizing the International Monetary Fund (IMF), Ghana's President, Nana Addo Dankwa Akufo-Addo, has tasked Finance Minister Ken Ofori-Atta to commence formal engagements with the IMF.

A statement signed by the Information Minister, Kojo Oppong Nkrumah, said, "This follows a telephone conversation between the president and the IMF Managing Director, Kristalina Georgieva, conveying Ghana's decision to engage with the fund."

The Ghanaian government is set to start talks with a delegation from the International Monetary Fund (IMF) over an economic support package.

The Ministry of Finance stated the government is committed to successfully negotiating a program with the IMF in the coming months. According to the Ministry, the main reasons for this new visit to the IMF are the deteriorating debt to GDP ratio, which stands at 84%, and the high inflation rate, which currently stands at 28%. As a result of the high debt ratio, Ghana does not have access to the capital markets, and the lazy E-levy tax is not raising the resources the government needs.

Historically Ghana has been to the IMF for economic support seventeen times. Previous IMF programs supported the Ghanaian government with unsustainable debt position, external shocks, and balance of payment issues. In fact, Ghana has visited the IMF under the last three governments (NPP and NDC governments).

The recent widespread backlash which followed the announcement that this current government has decided to go for the IMF bailouts stems from the statements made by leading government members (including President Akufo-Addo and Vice President Bawumia) equating IMF bailout to incompetence.

Prior to the 2016 election, this government promoted the argument that a visit to the IMF meant that the ruling government was not up to the task and must be shown the door.

The Akufo-Addo-Bawumia government has consistently stated that "they have the men" and expertise to steer the country away from IMF. And as such, the public outcry is the result of another failed promise from this government.

Moving forward, the NDC-USA encourages the Akufo-Addo-Bawumia government to first apologize to Ghanaians for this U-turn in policy. We also encourage leading members of the NPP government to engage in more objective and responsible political commentary.

Finally, the government should reach out to the opposition NDC and other stakeholders to help negotiate and successfully implement the IMF program to restore public confidence because key government appointees and figures like Minister of finance Mr. Ken Ofori-Atta and Minister of State at the Presidency, Mr. Charles Adu Boahen have lost credibility and lack capacity to assist Ghana to negotiate a better deal for Ghana, in a timely manner. Time is of the essence!

Akufo-Addo angry, dissatisfied over slow pace of work on Bol...
21 minutes ago