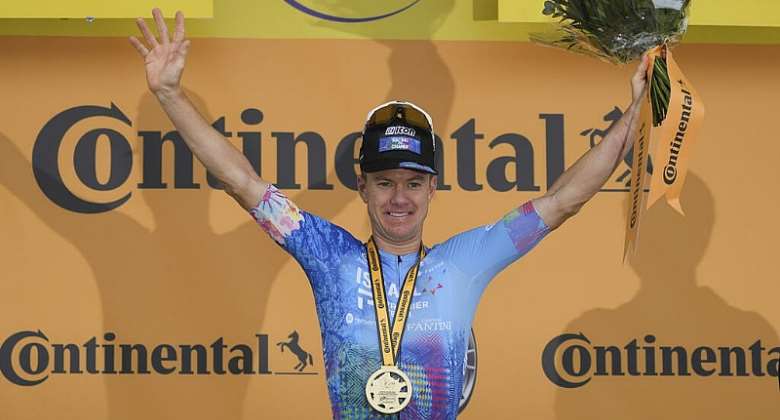 Simon Clarke won the fifth stage of the Tour de France on Wednesday after an incident packed day involving crashes on the cobblestones along the route and a sprint finish.

Wout van Aert retained the overall leader's yellow jersey despite coming off his bike as the riders were racing towards the first of the 11 cobbled sections between Lille Metropole and Arenberg Porte du Hainaut.

The 27-year-old Belgian was able to remount and catch up with the peloton – although he almost fell again as he clipped the wing mirror of his own team car.

“In my opinion the roads were way too dangerous," said Van Aert. "Everyone expected some stress because of the cobbles but then there was also a lot of narrowings and things on the road.

Risk
"I didn't want to take risks and the moment when I thought it was necessary to start moving up to the front I immediately crashed because of a narrowing.

“I hurt myself a bit but also I lost a bit of confidence to go really in a fight for position. I was in the back chasing instead of having a good position on the cobbles. So for me from then on it was a fight the whole day.”

Clarke, 35, was in tears after crossing the line to claim his first Tour sage win just ahead of Taco van der Hoorn at the end of the 157km course.

The 35-year-old Australian recounted that he had been jobless before the Israel–Premier Tech team offered him a chance to ride.

Challenge
"This season, I've come out in every race swinging,” Clarke said. “I still can't believe I got it on the line there.

"Taco was well ahead of me with less than 50 meters to go. I was cramping in both legs and I just lined up the biggest throw I could possibly do and I just prayed it was enough."

“That was a really hard day," said Pogacar who is seeking to become only the sixth man to win the world's most prestigious cycle race three times in a row.

"Quite stressful in the first part, and the second part was really tough. It was a lot of power on the pedals through the day, the cobbles were dusty and dangerous.

"I'm just happy this day is over and I rode well. In the end it was a really good day for me and the team."

Latest Photo Reports
Catch up with all the political quotes from our politicians.
Advertise here
More from France
ModernGhana Links
France tightens grip on motorbike 'rodeos' after teen dies in Marseille
After months of wildfire, France told to brace for floods
Volunteer firefighters under pressure as France battles historic wildfires
TOP STORIES