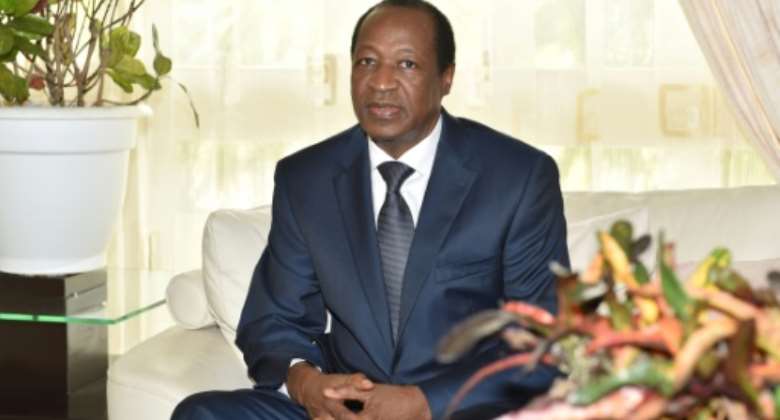 Controversial figure: Compaore ruled for 27 years before being forced out by protests in 2014. By ISSOUF SANOGO (AFP/File)

Burkina Faso's former leader Blaise Compaore, who was forced into exile in 2014, is expected to return to Ouagadougou shortly for a summit of ex-presidents, a government spokesman said on Wednesday.

"By the end of the week, an important meeting between the former heads of state of Burkina Faso will be held towards accelerating the issue of reconciliation," spokesman Lionel Bilgo said.

Compaore, 71, is "very likely and even expected" to attend, he added.

A source close to the government and Compaore's entourage told AFP late Tuesday that he was to return to Burkina Faso to meet its military rulers this week.

The source said he was "due to arrive on Thursday or Friday for a short stay" and would "be received by the head of state in the framework of national reconciliation".

A source in Compaore's entourage confirmed the trip.

"Burkina Faso has engaged in a reconciliation process... All arrangements are being made so that president Compaore actively participates," he said.

There was no official announcement of when Compaore, who also holds Ivorian citizenship, would land.

Compaore seized power in a coup in October 1987, on the same day that Burkina's revolutionary leader Thomas Sankara -- his former comrade-in-arms -- was gunned down by a hit squad.

He went on to rule for 27 years before being forced out by popular protests, supported by the army, over his bid to stay in power.

He seized power on the day that Burkina Faso's revolutionary leader, Thomas Sankara, was gunned down. By DOMINIQUE FAGET (AFP)

On April 6 this year, he was sentenced in absentia to life in prison by a military court for his role in Sankara's assassination.

His return appears to be aimed at shoring up unity at a time when the ruling junta is struggling with a deep crisis.

The impoverished, landlocked Sahel state is being battered by a nearly seven-year-old jihadist campaign that has claimed several thousand lives and forced almost two million people from their homes.

Forty percent of the country is out of the government's control, a representative of the regional bloc ECOWAS said last month.

In January, soldiers disgruntled at failures to stem the insurgency staged a coup, forcing out the elected president, Roch Marc Christian Kabore.

The new strongman, Lieutenant-Colonel Paul-Henri Sandaogo Damiba, was sworn in as president in March.

Damiba declared security to be his top priority but after a relative lull, attacks resumed, with the loss of hundreds of lives.

In June, 86 people were massacred in the northern border village of Seytenga while at least 34 people were killed in two attacks last weekend.

The planned meeting of former leaders will "share energies and synergies... to effectively fight the tragedy striking us but also to reduce internal rifts," said Bilgo.

On Wednesday, Sankara's lawyers called on judicial authorities to ensure Compaore was arrested as soon as he set foot in Burkina Faso.

Coup leader Lieutenant-Colonel Paul-Henri Sandaogo Damiba, pictured at ceremonies in March where he was sworn in as transitional president. By OLYMPIA DE MAISMONT (AFP)

In a statement, the president's office said the talks were an "important meeting for the life of the nation" but "do not impede judicial action that has been undertaken against certain individuals."

A source close to the president's office said Compaore would be accommodated in a villa in Ouagadougou that had been used for Kabore when he was placed under a house arrest after the January coup.

Compaore supporters on social media have called for a show of support at Ouagadougou airport on Friday morning.