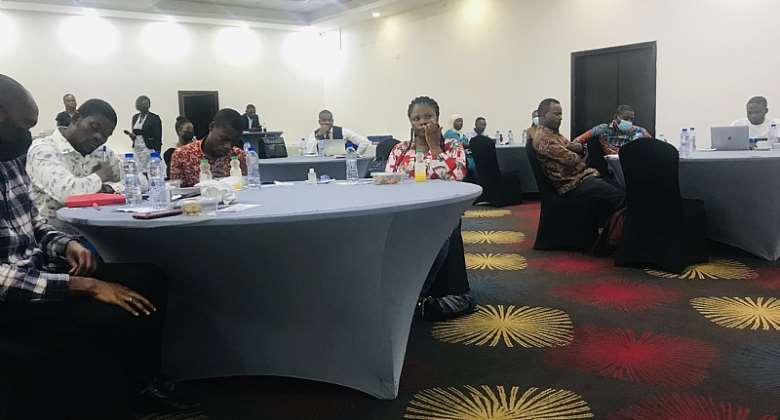 At the FIC media workshop

The Financial Intelligence Center (FIC), at a two-day workshop trained some selected journalists on anti-money laundering and terrorism financing and the raging effects if the country fails to check it.

The program, which was held at the Alisa Hotel in Accra from Tuesday, July 5 to Wednesday, July 6, 2022, saw many journalists from several media houses in Accra participating.

Facilitating the workshop were Mr. Seth Nana Amoako, the Head of Compliance Unit at the Financial Intelligence Centre (FIC), Manasseh Azure Awuni, an investigative journalist, and other anti-terrorism financing and money laundering facilitators from the FIC.

Mr Seth Nana Amoakoh educated the journalists about money laundering, terrorism and its financing and urged them to find interest in writing compelling stories about the effects of these criminal activities to win public support.

Manasseh Azure, in his turn, encouraged his colleagues to utilize investigative skills in unearthing stories about money laundering and terrorism and their financing.

He also urges journalists to adopt best strategies he outlined to unearth stories that ordinarily they may not have seen with their naked eyes.

He again urged the participants to be actively involved in the program and also employ the knowledge they would acquire at the end of the training.

“As good journalists, it's important to use our investigative skills in dealing with matters regarding money laundering and terrorism and its financing.

“Such training is very useful in the exercise of our work as journalists. I have learnt many things many I didn't know. So encourage all of us to be interactive and learn from this very important Program,” Manasseh Azure said.

Money laundering is a financial transaction scheme that conceals the identity, source, and destination of illegally obtained funds.

Terrorist financing, according to the United Nations Office of Drugs and Crime (UNODC), also refers to the means and methods used by terrorist organizations to fund their operations.

The Financial Intelligence Center (FIC) serves as the National Center for the receipt and analysis of suspicious transaction reports and other information relevant to the predicate crimes of money laundering, terrorism financing, and proliferation financing (ML/TF & P), as well as the dissemination of actionable intelligence to competent authorities.